Here's my MP write-up for The Deep, a member of the superhero team the Seven. The Deep is not well-respected by the other members of the Seven. After his inappropriate sexual advance on Starlight, he lost even more respect.

Aside from  having gills that allow him to breathe underwater, not much is known about the Deep. Since Starlight says the other members of the Seven, including herself, consider him to be a joke, I built him on fewer CPs than the others. 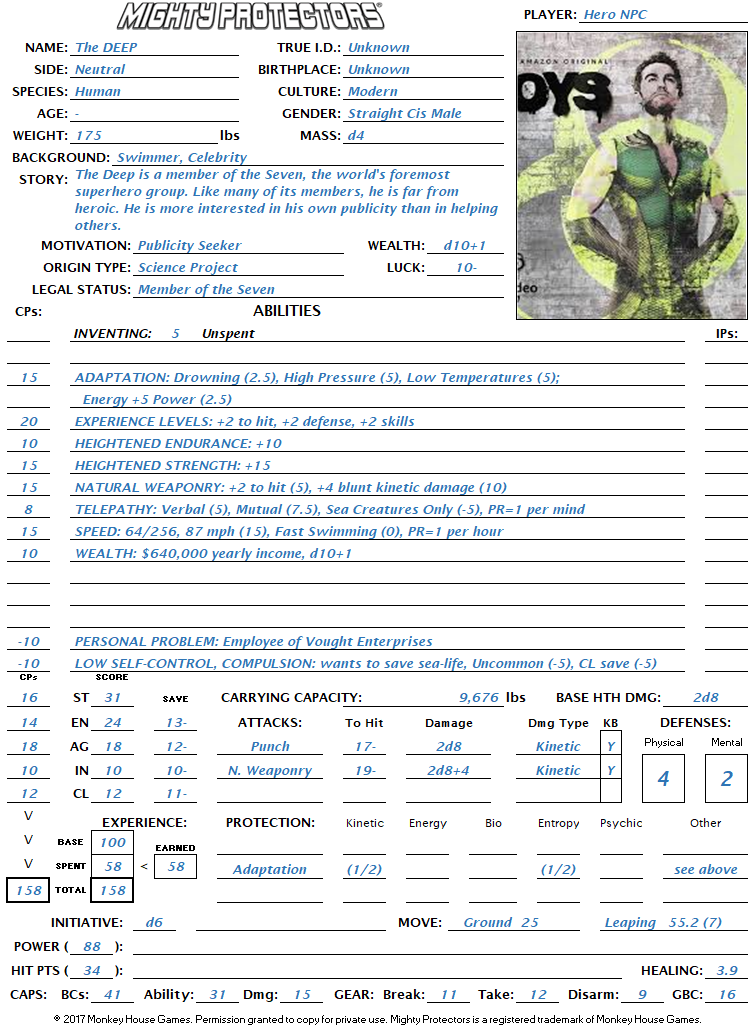 The Deep is a character on the Amazon show, "The Boys". This write-up is by B.K. Adams. Mighty Protectors is a trademark of Monkey House Games.

Here's my MP write-up for A-Train, a member of the superhero team the Seven. It is mentioned in one of the episodes that A-Train can run over 1000 mile per hour and due to his Speed and Super Speed abilities, he can run at 1044 mph in this write-up.

In one episode he is shown slowly pulling a train with perhaps ten other connected train cars, but he doesn't seem to be super-strong like Homelander is. I therefore used Telekinesis, with a lot of modifiers, to simulate how he uses his Speed ability to drag super-heavy things -- like trains. 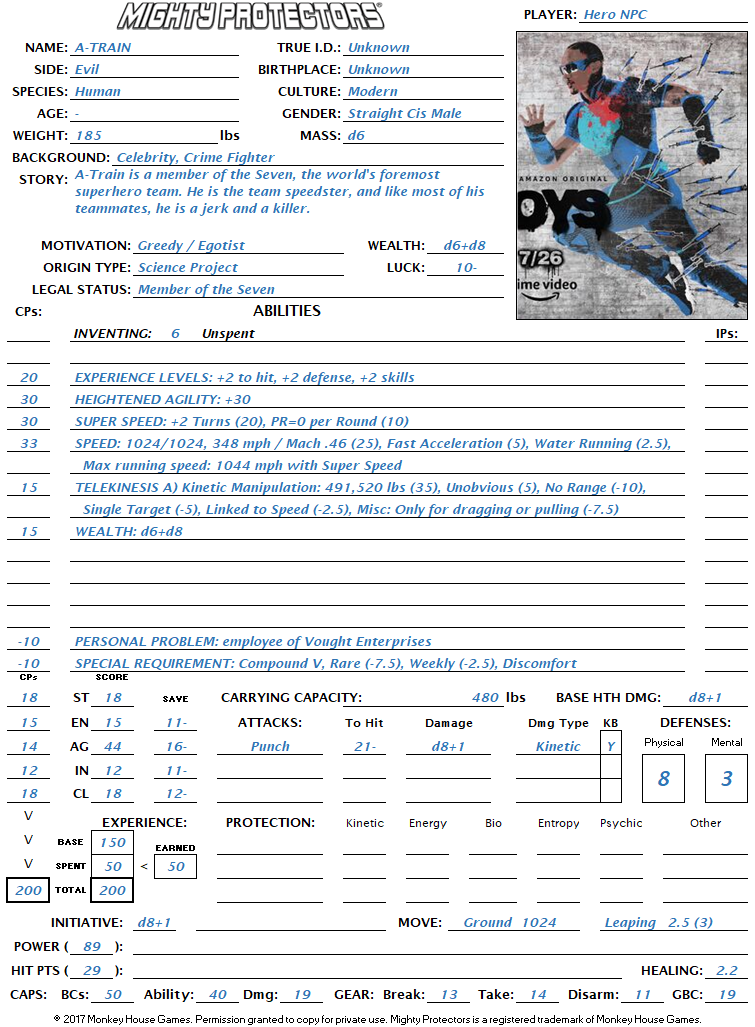 Notes:
1. It is never shown but rather inferred that A-Train can run over water.

A-Train is a character on the Amazon show, "The Boys". This write-up is by B.K. Adams. Mighty Protectors is a trademark of Monkey House Games.
Posted by bk adams at 4:03 PM 1 comment:


Here's my MP write-up for Translucent, a member of the superhero team the Seven. Translucent has two main abilities: invisibility and invulnerability. To model his invulnerability, I've given him Armor, Adaptation, and Invulnerability (to kinetic and energy).

Translucent has carbonized skin that is as resilient as diamond. He can't be hurt from the outside - except for a vulnerability to electricity - but should he swallow something, or otherwise have a dangerous object put inside of his body, his invulnerability and armor don't apply.

His invisibility does not apply to clothes or carried items, which results in him being naked most of the time. 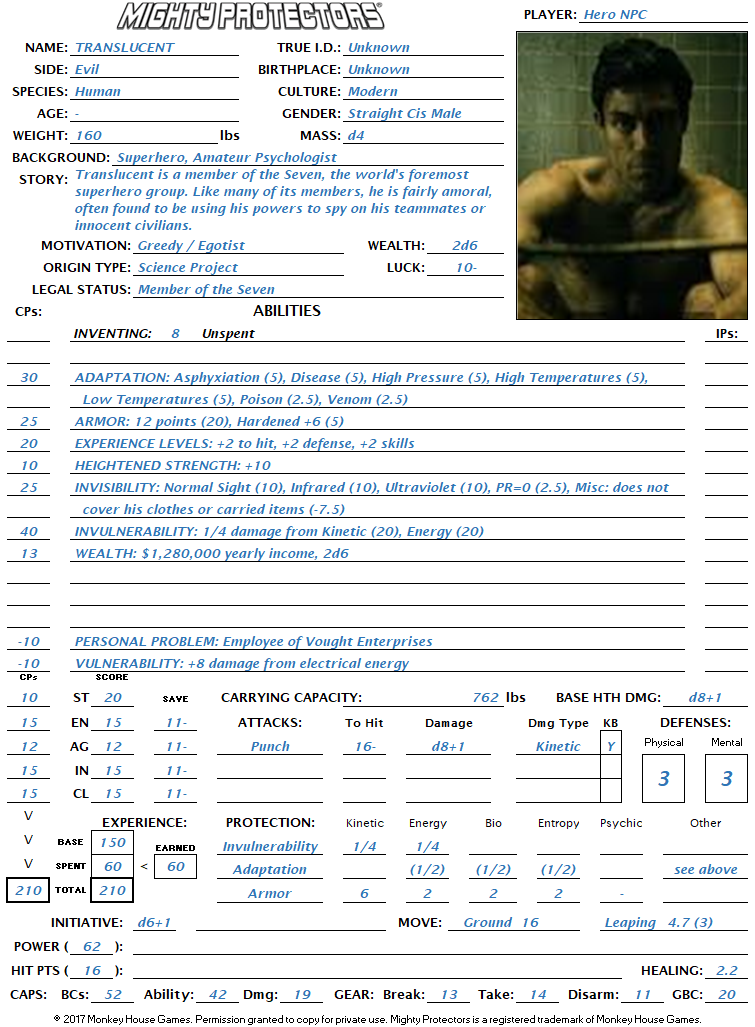 Translucent is a character on the Amazon show, "The Boys". This write-up is by B.K. Adams. Mighty Protectors is a trademark of Monkey House Games.
Posted by bk adams at 5:29 PM No comments:


SPOILER WARNING!
This write-up details the super-abilities of a character from the new Amazon Prime show The Boys.
Here's my Mighty Protectors write-up for Homelander, the leader of the supers group called "The Seven."

I based his stats and abilities on the first eight episodes of the Amazon series "The Boys", although in some cases I had to guess. For example, I don't know exactly how strong he is since it's never stated, although there is a scene in one episode where Queen Maeve asks him to save a plane, so he's at least strong enough to lift a modern passenger jet (approx. 300,000 lbs. fully loaded with fuel and passengers). 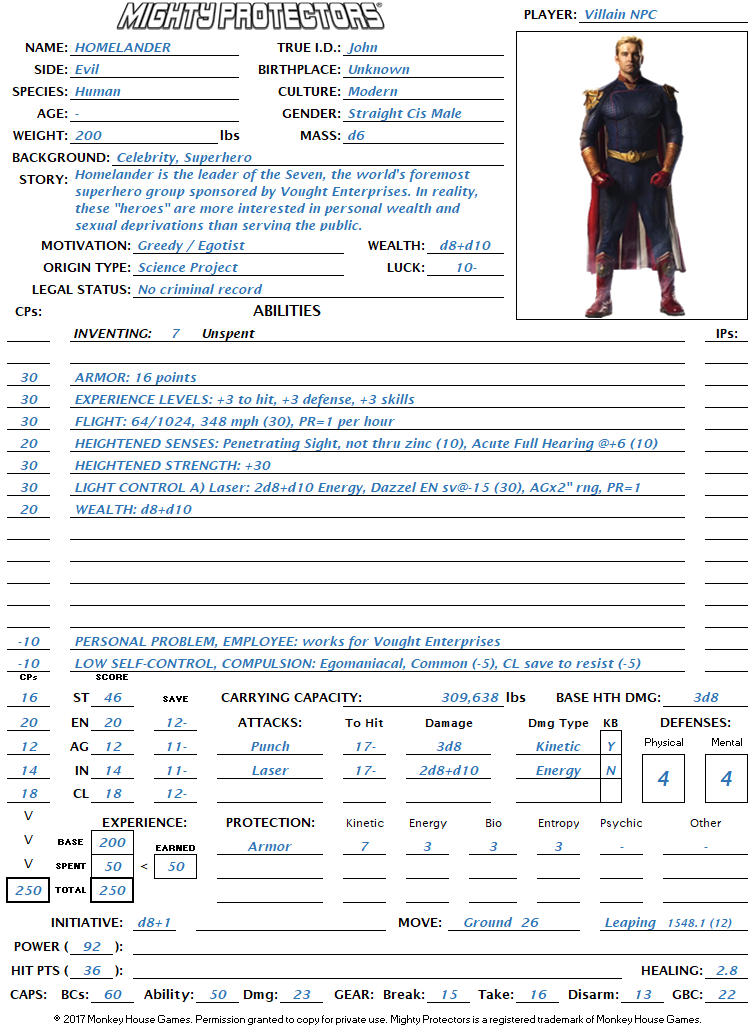 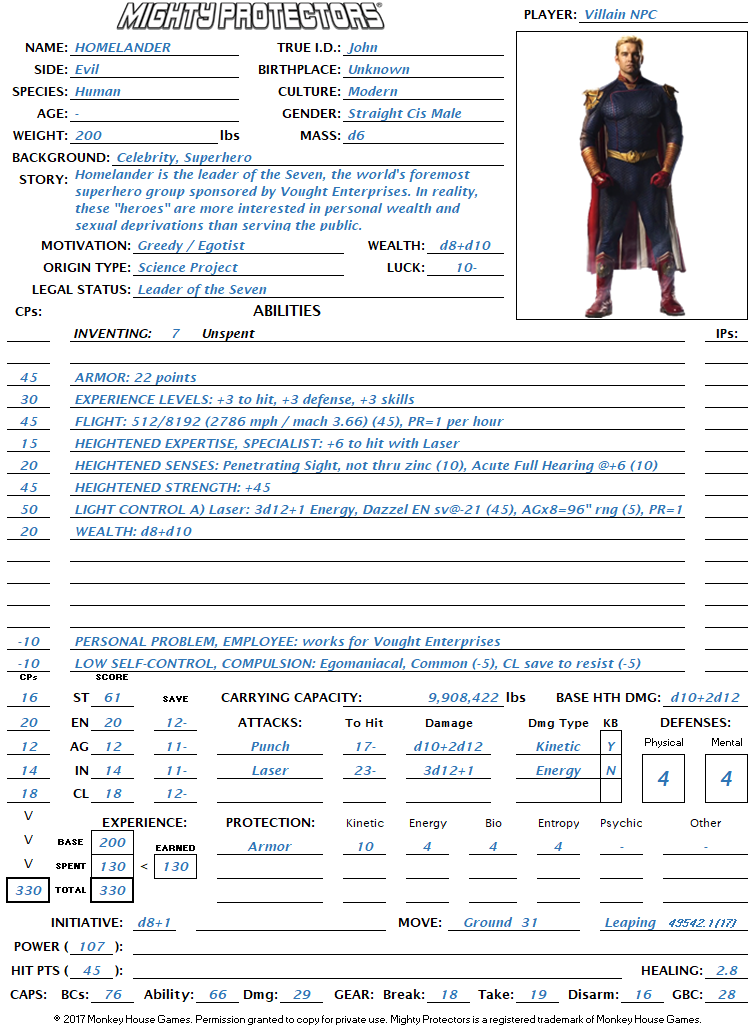 Homelander is a character on the Amazon show, "The Boys". This write-up is by B.K. Adams. Mighty Protectors is a trademark of Monkey House Games.

Here is the combat record sheet that I created years ago for use in my Mighty Protectors games. The sheet is saved as an MS Excel 97-2003 workbook. It automatically generates initiative rolls and can even handle characters with super speed, as shown on the last three lines. A PDF version is also included. Enjoy!

Notes:
1. Excel defaults to auto calculation every time a cell is altered. To stop this, you need to go into its Options/Formulas and switch it from auto calculation to manual calculation (with the default key being F9).
2. The "Init +" column is for the bonus from Heightened Initiative.
Posted by bk adams at 6:26 AM No comments:

Here is my Mighty Protectors write-up for the Controller, a Marvel comics villain who was created by Archie Goodwin and George Tuska, and who debuted in Iron Man #12 (Apr, 1969). His stats and abilities shown here reflect Iron Man #12, #13, and Captain Marvel #28-#33.

Slave Discs
Basil Sandhurst created the "slave discs", which he places on his victims, usually on the back of their neck or on their forehead. Once attached, the victim becomes a slave of the Controller, who gains a telepathic bond with his victim. The discs also beam mental energy to the Controller, making him stronger and tougher. The more slaves he creates, the stronger he becomes, as shown on the chart below.

I used the Arsenal ability to simulate his slave-discs, which you can see here. By using the "splitting" modifier I was able to divide each slot into 8 sub-slots. With 24 arsenal slots, this effectively gives the Controller 192 slave-discs. In the comics, the Controller boasts of having up to 1000 slaves. That's possible to do by increasing the sub-slots to 64 (giving 1536 discs), but doing so will exceed his Ability cap.

The mental energy received by the Controller from his slaves has a range, and while it is never explicitly stated in the comics, a GM could assume that it is several miles. 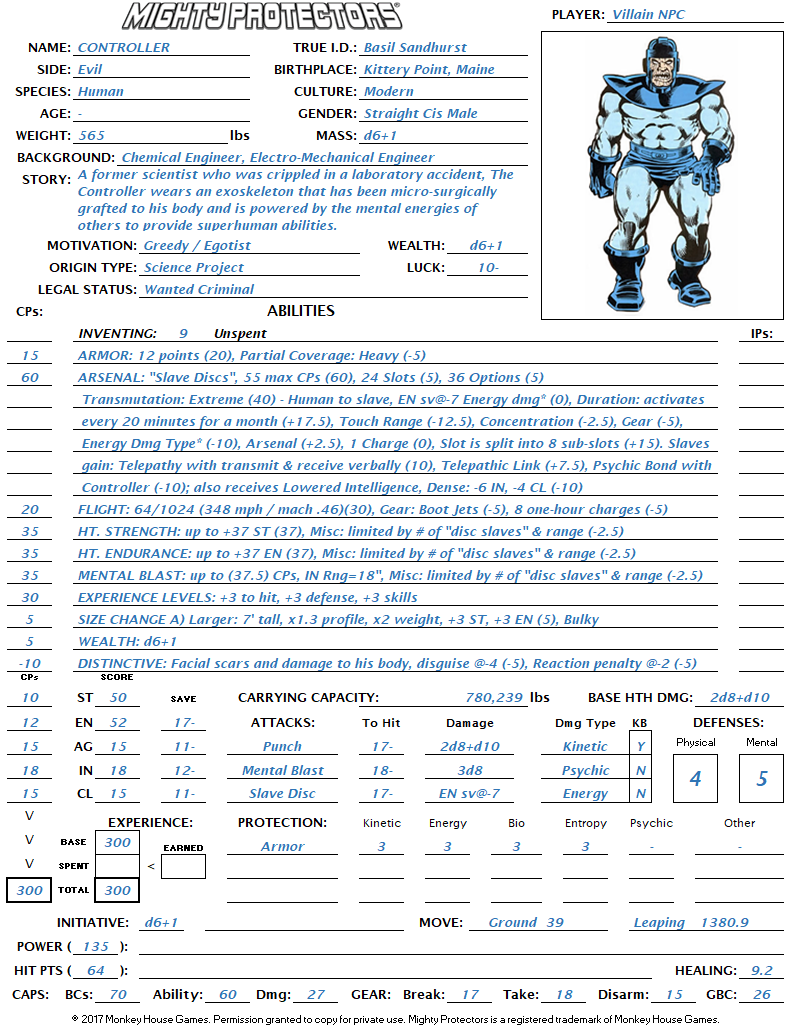 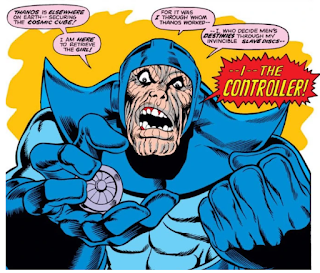 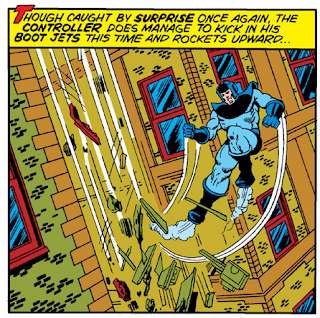 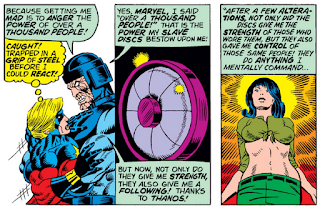 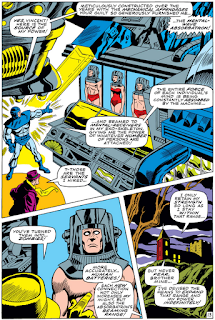 Notes:
1. With the help of Thanos' superior technology, the Controller's slave discs are improved so that they directly beam the victim's mental energy, eliminating the need of the "Absorbatron". However, they still have a range, which if exceeded cuts off the extra ST, EN, and Mental Blast abilities.
2. The Controller must succeed with a HTH attack to place a slave disc on a victim, such as a hero PC. If he takes any hit point damage while doing this, it will fail (due to the  Concentration modifier).