Here is my MP write-up of Thanos' gigantic spaceship, the Sanctuary II, as it is shown in Avengers: Infinity War and Avengers: Endgame. 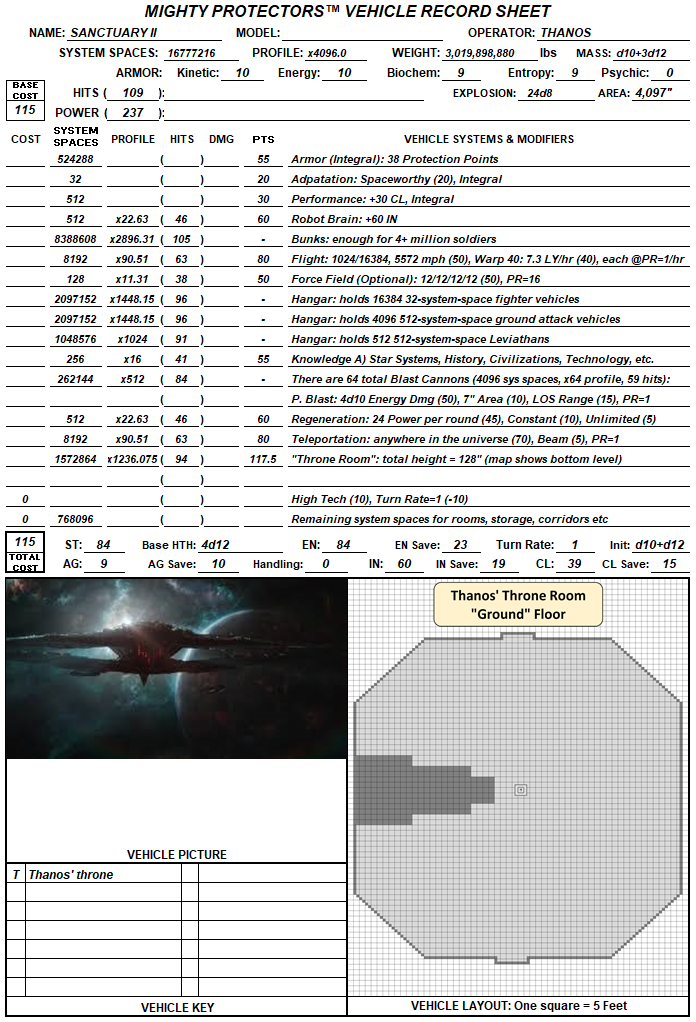 Notes:
1. This write-up is an almost totally subjective take on the vehicle as there are almost no "official" stats for it. So take the stats and figures with a gigantic grain of salt.
2. Adaptation: Spaceworthy consists of: asphyxiation, cold temperatures, low pressure and radiation.
3. This ship is much bigger than the comics version, with an overall length of approximately 2 miles. and approximate height of 1/8 of a mile.
4. The Regeneration system is the vehicle's central power system.
5. The size of Thanos' "throne room" is based upon scenes in Avengers: Infinity War. Suffice it to say that it is large, about the width and depth of a sports arena but far, far taller (approx. a 60-story building). Note: the dark grey on the map represents a rock-like substance.
6. The giant blast cannons are located on the "wings" of the ship, with 8 per wing per side and edge, for a total of 64 cannons.
7. I've edited this to include Flight, Warp and a few other systems, some of which are taken from this info.
8. I've updated the vehicle to include bunks for soldiers ("biggest army in the universe") and hangars for ground and space sub-vehicles as well as a hangar for the leviathans.

This writeup is by B.K. Adams. Avengers, Thanos, Sanctuary II are trademarks of Marvel Entertainment Group. Mighty Protectors is a trademark of Monkey House Games.
Posted by bk adams at 10:36 AM No comments: