This write-up stretches the MP vehicle rules a bit, but I think is technically correct. Operating the rickshaw requires a human to spend an Action, grabbing the two handles, and then proceed to pull the vehicle. It will cost the puller 3 Power per hour to operate. Historically, a rickshaw puller would travel 30-40 miles a day. 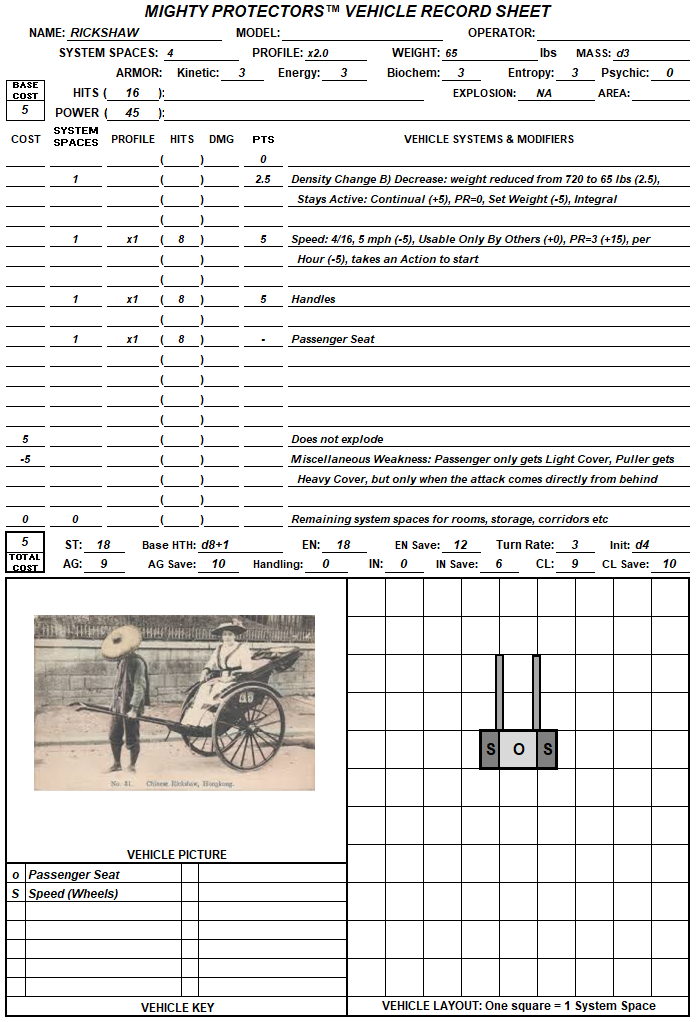 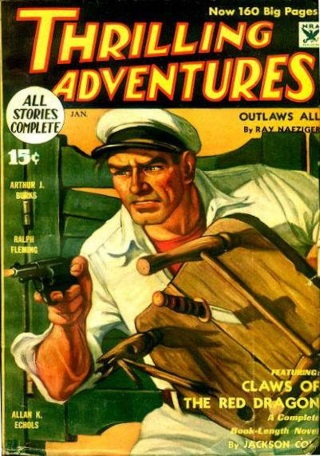 This is a Pulp-Era campaign set in the early 1930's. During the campaign's first session, the players made their characters, who include:

Note that some of the characters are not yet complete and/or do not add up properly. This often happens with handmade characters.

Issue #1 Recap
Each of  the characters receive an impeccably written note that reads:

You are cordially invited to attend the first ever meeting of the Argosy Adventurers' Club, located on the 103rd floor of the Argosy Building in New York City. Dinner will be served at 7 pm on January 28th in the year of our Lord, 1932.

Should you require transportation, it shall be provided to you, in the form of aeroplane or automobile service.

Yours in the Spirit of Exploration and Adventure,

On the listed date, the characters arrive at the Argosy building, the tallest structure in the world. On the top floor, they meet Mr. Tunsley, who proposes a business arrangement: in exchange for their stories, to be printed in one of Mr. Tunsley's periodicals, the characters will receive equipment, transportation, and remuneration for their efforts.

The character's agree and are quickly given their first mission: fly to Shanghai, China, on a modified Ford Tri-Motor plane, and locate the twins of one of his old friends, Mr. Monahan Kersey.

Because of the distinct possibility of being attacked by Japanese forces, who have been bombing Shanghai, the PCs decide to land their flying boat at Ningbo, a small town fifty miles south of Shanghai. Once out of the plane, Mr. Arthur Wilcox declares he shall obtain passage to Shanghai for the group, but he famously fumbles his luck roll, which gets the PC's attacked by a gang of cutthroats.

The PCs handily take care of the thieves but have absolutely no luck in obtaining a vehicle, and they refuse to steal one; apparently, no one wants to travel to Shanghai. Unable to find transportation, they are forced to walk the fifty miles to Shanghai, which takes the heroes approximately two days.

Arriving at the gates of Shanghai, the PCs are met at the British Section checkpoint by Sergeant-Major Cupp of the British Army. Cupp interrogates each of the PCs, wanting to know their names and their nationalities as well as their business in Shanghai. Convinced of their bona fides, he lets them pass into the city and even orders one of his soldiers to guide them to their destination.

The characters arrive at the house for which Tunsley gave them the address, but no one answers the door. Killian kicks in the front door and the rest of the PCs enter. They find the house has been ransacked.

While several of the PCs are searching through the house, Rik Killian goes back outside. Wondering what to do next, he notices that someone across the street appears to be watching the house. He immediately starts running towards the man, who deftly pulls out a revolver. Killian, however, is faster, and pulls out his own gun and shoots the man. The wounded man is immediately knocked unconscious.

After searching the unconscious asian, Killian finds a matchbook from the "Black Swan Club". Killian leaves his would-be assailant, returns to the house, and informs his companions about what happened and the clue he found.

The PCs decide to visit Sergeant-Major Cupp once again, hoping to gain more information. A short time later, Sgt. Cupp informs the PCs that the Black Swan is a notorious den of prostitution, gambling, and even slavery -- and that the club is located in the Russian-controlled section of Shanghai, not far from the Yangtze river.

The PCs thank the sergeant and return to the ransacked house. Unfortunately, they had forgotten about the man Killian shot, and discover that he is no longer there.

They decide to go to the Black Swan, as it is their only clue to finding the missing Kersey twins. On their way, they are stopped at a Russian checkpoint. Killian bribes the Russian in charge to allow his party to proceed. 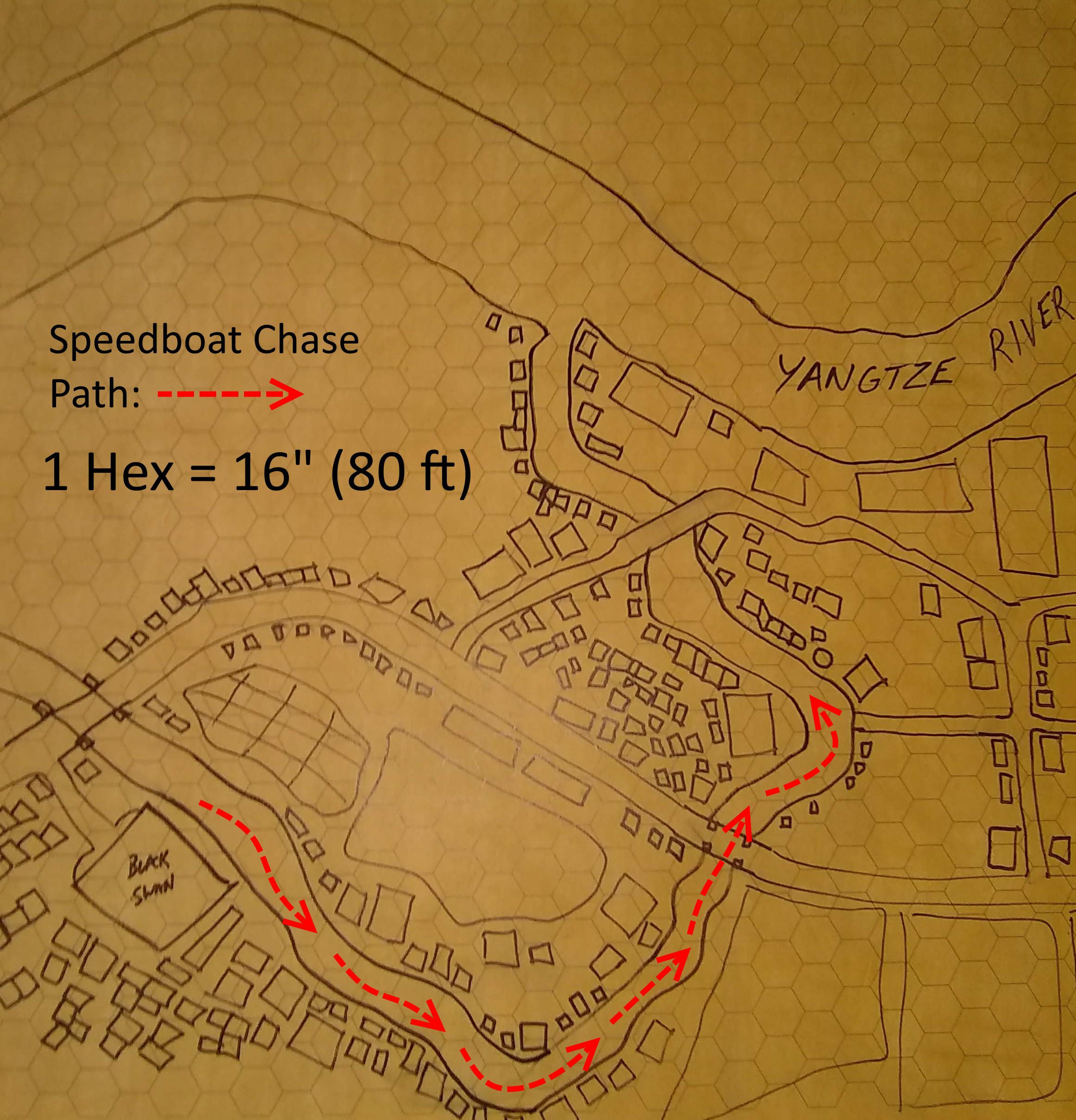 Later, while hiding near the Black Swan, Miss Sophia Mayer, using a talent she learned in mystical Shamballa, hears dozens of guns being readied for combat. She also hears the sound of a motorboat being started.

The heroes decide to stealth their way to the back of the club, where they see a speedboat with three passengers zooming away. One of the passengers, a white man, seems to be slumped over. Thinking they may have at last found one of the persons they were sent to find, they jump into a second boat and give chase.

After a gun-blazing chase through the canals of of Shanghai, the PCs ultimately triumph. They learn that one of the passengers is indeed Jack Kersey, although he has been drugged and is unconscious.

Epilogue: The heroes learn that the driver of the boat is Georgy Miroslav, a White Russian, and the manager of the  Black Swan. The other man, the largest Asian they have yet to witness, is a man named Wo-Chong.

Next Issue: The Mystery of the Manchu Dragon!

The characters shown are copyright by their respective creator. Mighty Protectors is a copyright of Monkey House Games.