I had posted some of these characters to the monkeyhousegames forums but I figure that I may as well post them here!

Star Knight was a character that I had initially created as an NPC for one of my V&V3.0: Mighty Protectors superhero campaigns, but I ported him over to my brother's ongoing Ultraverse campaign.

Sir Walter Ealdwyne was a lesser-known knight of King Arthur's Court. Although strong and brave, his exploits were never heralded as much as some of the other knights. It was during the quest for the Holy Grail that the sorceress Morgan Le Fay cast a spell of eternal sleep upon him. His body was laid in the crypt in a castle which was later destroyed and buried. Sir Walter lay in an enchanted sleep for 2000 years.

He was awakened in the year 2415 by scientists of a highly technologically advanced Utopian society. He was given cybernetic parts and given a new mission: to travel back in time to prevent a coming cataclysm.

His nano-bot steed, Starion, was supposed to be given the knowledge of what to do, but a mistake led to the construct knowing 20th century pop-cultural references. As such, Sir Walter is not exactly sure what he is supposed to do. In the meantime, he has become a superhero.
Personality:

Sir Walter speaks archaically, with a lot of thees and thous. He can try to speak normally, but to do so he must make an IN saving throw at a -4 penalty. Because he has sworn an Oath of Knighthood, Sir Walter will: not lie nor cheat, will defend those who cannot defend themselves, give respect and care to women, and will give mercy when asked. To temporarily forswear his oath, he must make a CL save task check roll at a penalty of -4.

Upon the initiation of combat, Star Knight will spend 1" of movement to activate his linked abilities of Reflection and Shield. If his mount has not already been summoned, he will do that for his movement, and then go on Full Defense (+6 to Defense).

In the ensuing rounds of combat he will attack his foe(s) with his sword until his victory or defeat.

Let it be known that thou face a true knight of King's Arthur's Court. If thou shalt not yield, then let martial combat decide thy fate! 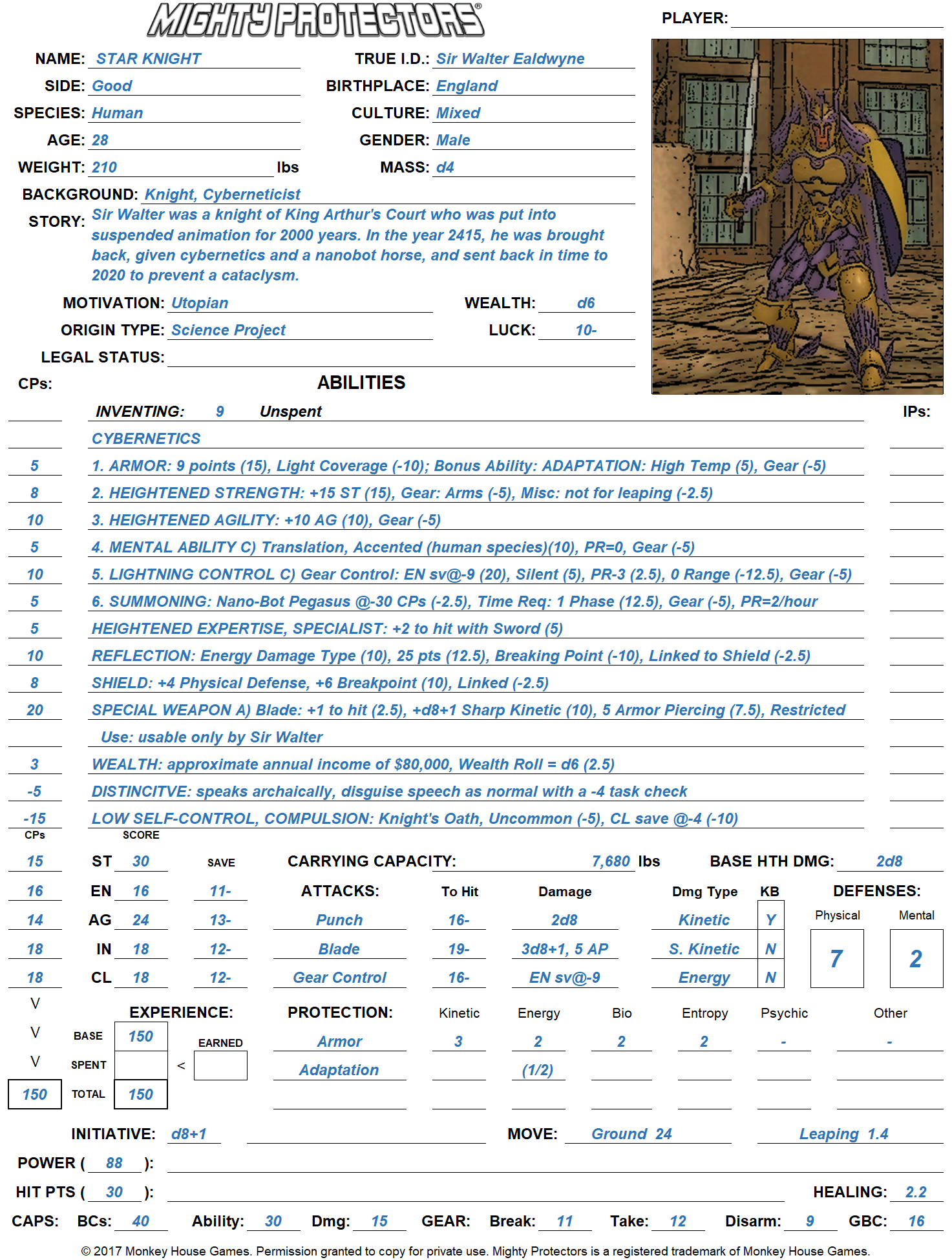 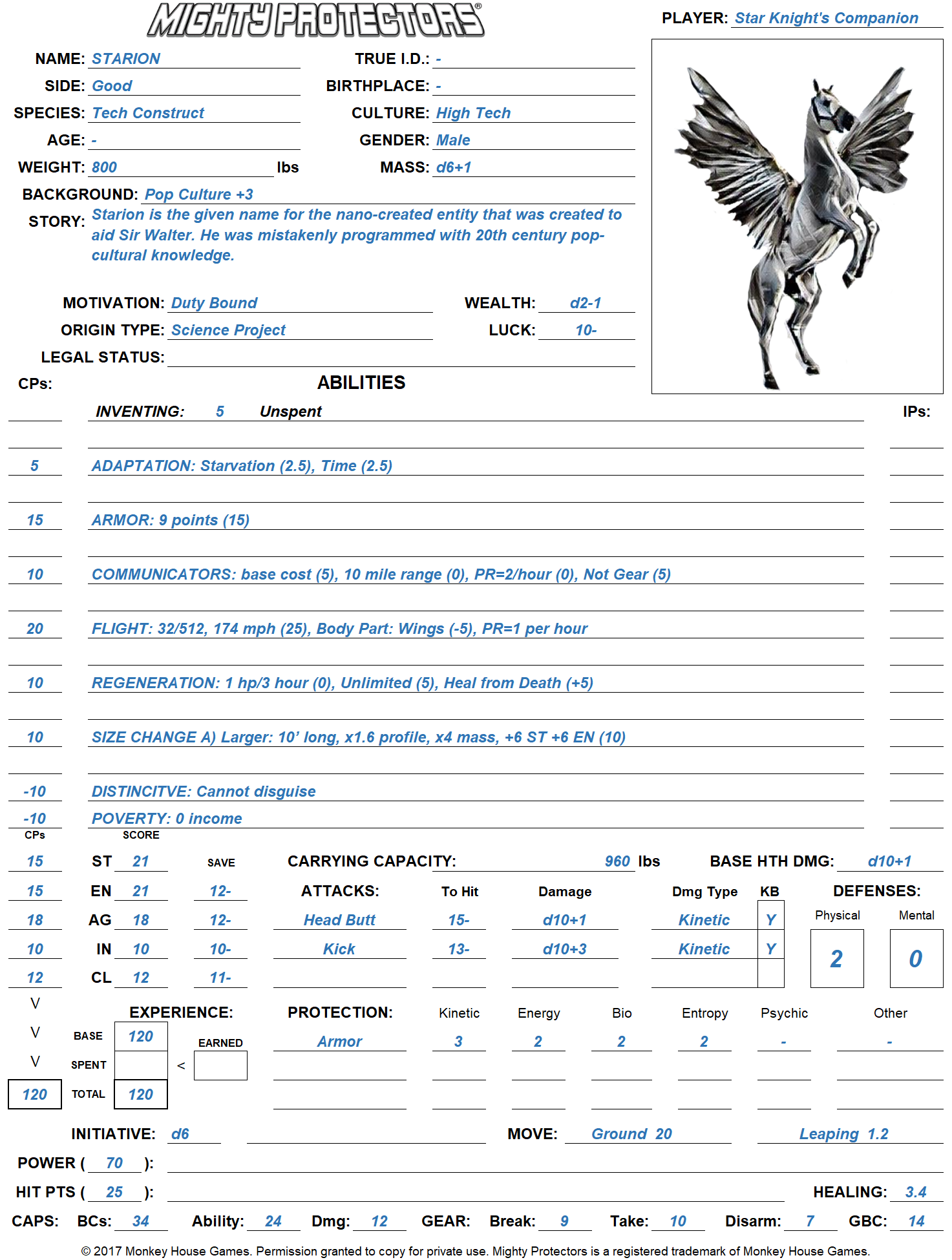 S.A.M. is a character that I initially created for my brother's Ultraverse Superhero RPG campaign, but at some point, I converted him over to the Mighty Protectors rules, and this is the result of that conversion.

Origin: S.A.M. -- or Super Awesome Machine -- is a big robot that was created by Solia Willa "Billie" Santos, a 13 year-old girl with a genius IQ and a mutant ability to permanently create plastic.

She lost her parents and her older brother, Tony, two years ago as the result of a terrible car crash. Since the accident, she has been living with her Aunt Irene and Uncle Albert, farmers with a 40 acre apple orchard near Alamogordo, New Mexico. Billie assembled S.A.M. in her uncle's barn in a span of just over of six months.

Billie loves Lord of the Rings and programmed S.A.M., who's actual name is Samwise Aragorn Mithrandir, with an encyclopedic knowledge of the books and films. 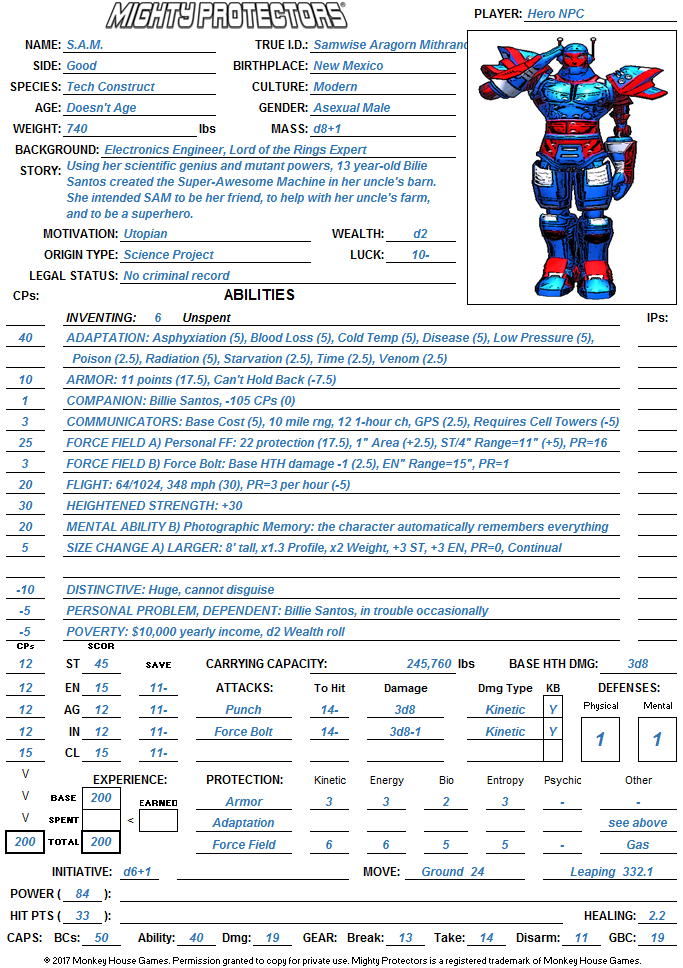 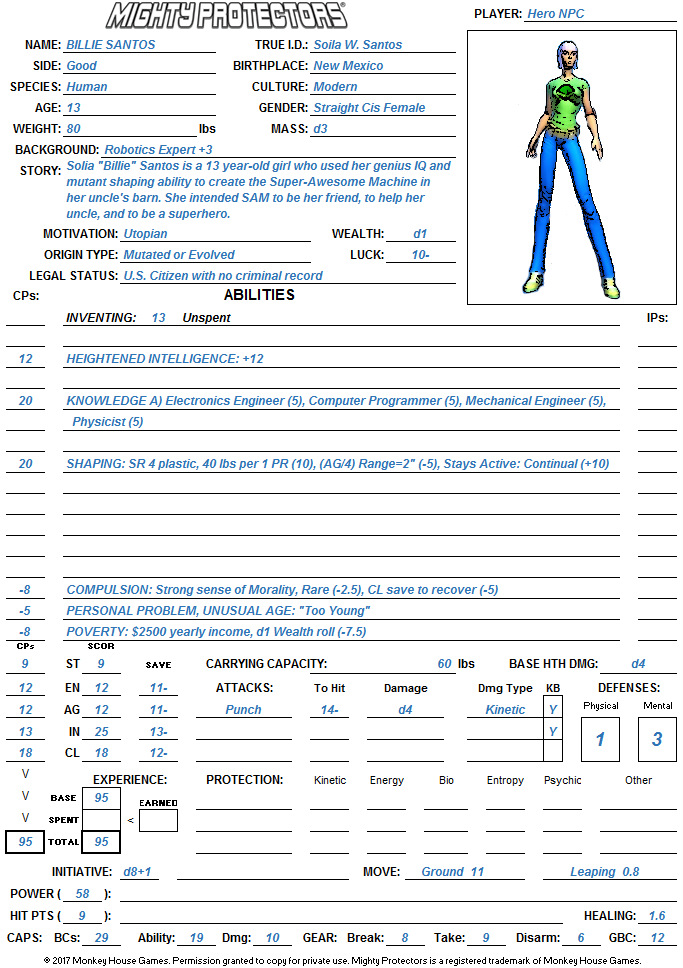 S.A.M. and Billie Santos are characters created by B.K. Adams, copyright 2018. Mighty Protectors is a trademark of Monkey House Games.

Here's Alley Cat with her 6 XP spent. Additionally, I revised her a little bit: I dropped her super leap, gave her Luck with charges (note that she has 9 charges -- something that is not in the MP rules -- only because Jeff as GM allowed it), added Tracking Scent +3 to her Heightened Senses, and changed her Weaknesses. I play her in Mighty Protectors COH Ep. 6, Part A. 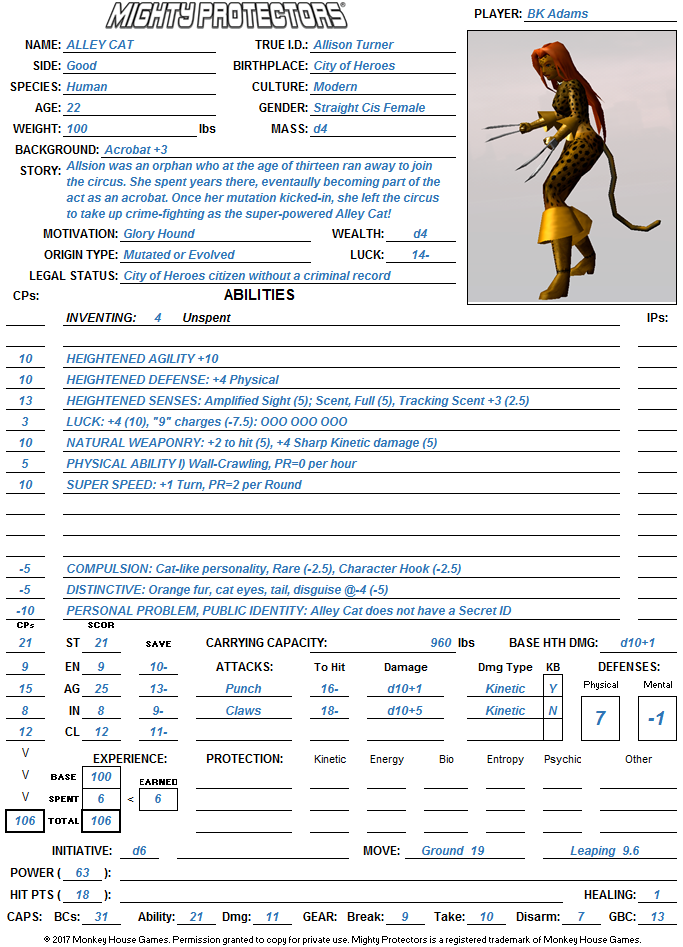 Lone Star was one of my lesser-played City of Heroes characters. He was a Natural Scrapper with Martial Arts for his primary and Willpower as his secondary power set.  His backstory, as flimsy as it was, was that he was a street vendor who sold tacos and fought crime in his spare time. I wanted him to be a "normal" without any super movement powers, but that got old pretty fast, and I stopped playing him around 8th level, IIRC.

You can see the video of the game where I play him in Part I and Part II of Episode 4.

I simulated the City of Heroes "Fists of Mu" ability by putting the Autofire x2 modifier on Natural Weaponry. So each use of the "Fists of Mu" is two attacks at no penalty to hit. By using the Multiple Actions maneuver on pg. 107 of the Mighty Protectors RPG rule book, I was able to roll a high number of attacks (8 at one point)! 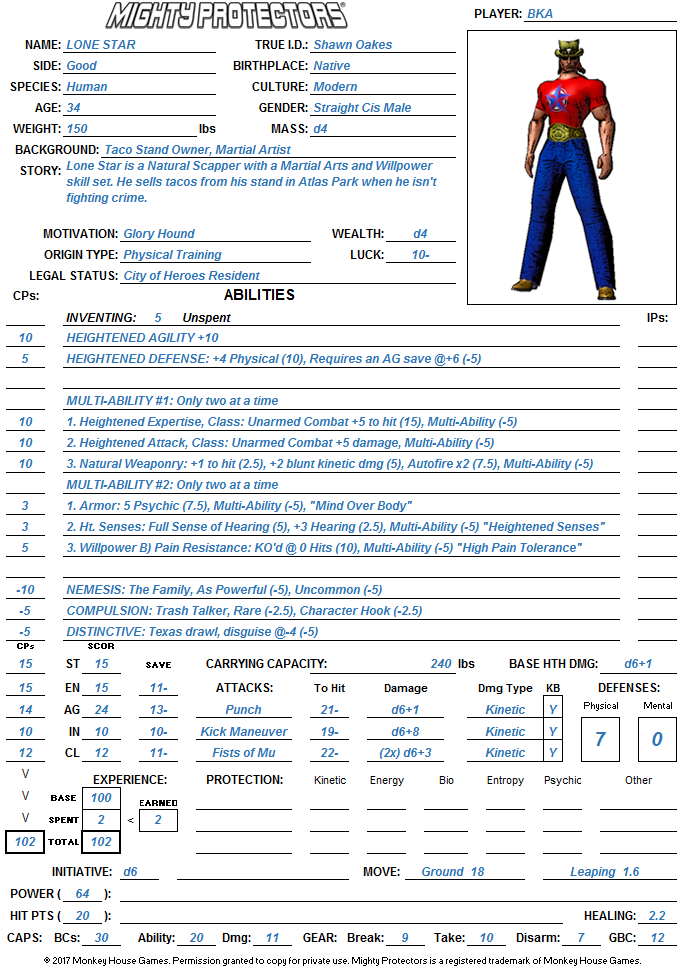 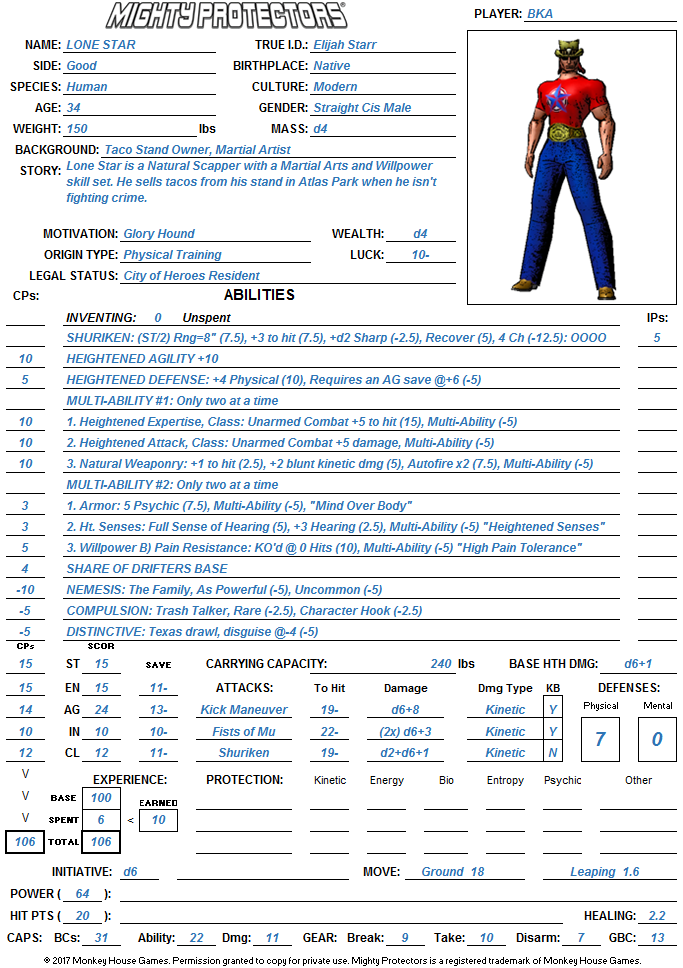 War Eagle was another one of my City of Heroes characters that I've recreated using the Mighty Protectors rules. You can see him in action in Episode 3 of  Jeff's campaign. You'll note that I've changed him a little bit from last night's game: I made his Flame Aura *not* do knockback and used the points to give him a small amount of armor. 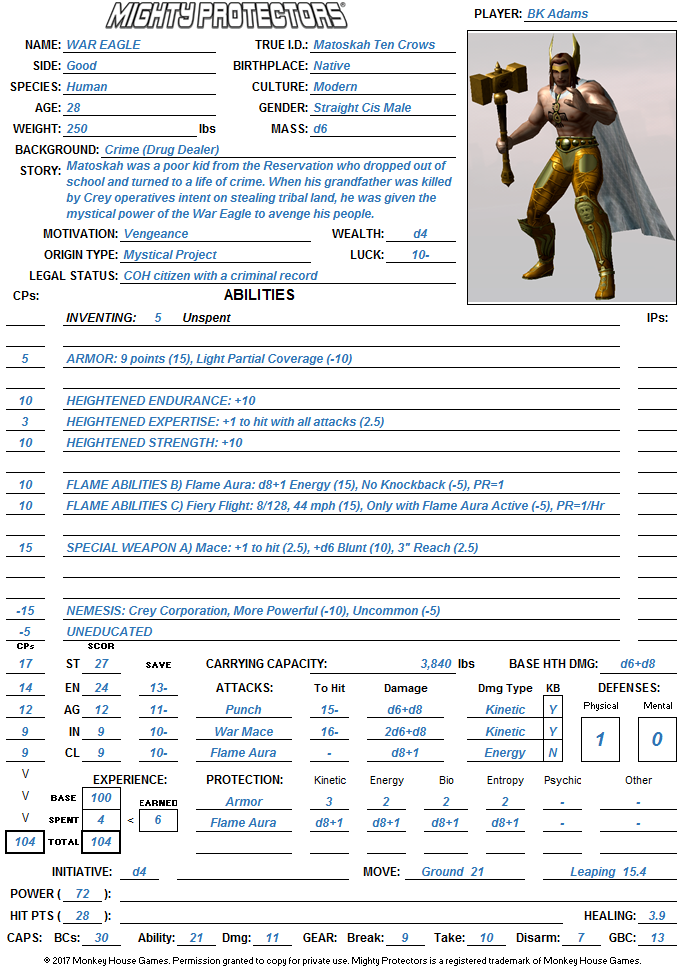 Alley Cat was just one of my numerous amusing and fun City of Heroes characters that I played back in 2004 and 2005. I've "re-imagined" her, complete with a COH costume, as a starting Low Power Mighty Protectors character for Jeff's new campaign.


Kam Starsend is the character that I created for my friend Talzhemir's MP Star Wars campaign. Kam is a blatant Han Solo ripoff. What can I say? I love me some Han. Anyway, I digress... I should point out that the Mighty Protectors rules work great for Star Wars, both for building characters and vehicles. You can see some of those write-ups here.

Kam is pretty basic, and like I said: he's a Han Solo knock-off. That being said, he's still a lot of fun to play!

Here's his character sheet, with a few xp spent. 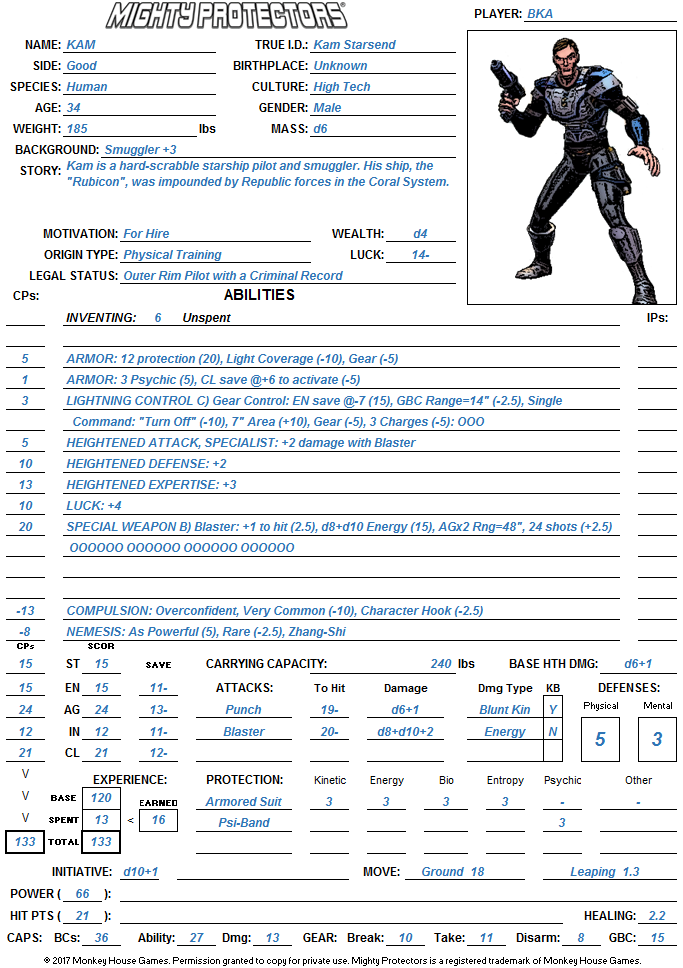 
This character is from another of Jeff Dee's campaigns, one in which all of the PCs started off as identical androids! The androids were the last sentient beings on a doomed colony ship sent to another star system from Earth 100+ years ago. The original goal was to colonize a new habitable world, but something went horribly wrong, and all of the humans were killed. Most of the ship was also badly damaged; it would soon crash into the world it was orbiting .

Blue, who got his name from the distinctive blue uniform he found, and his fellow androids used a massive Replicator machine to create a shuttle, in which they traveled to the surface of the alien world.

The campaign lasted 4 or 5 episodes but was fun while it lasted. 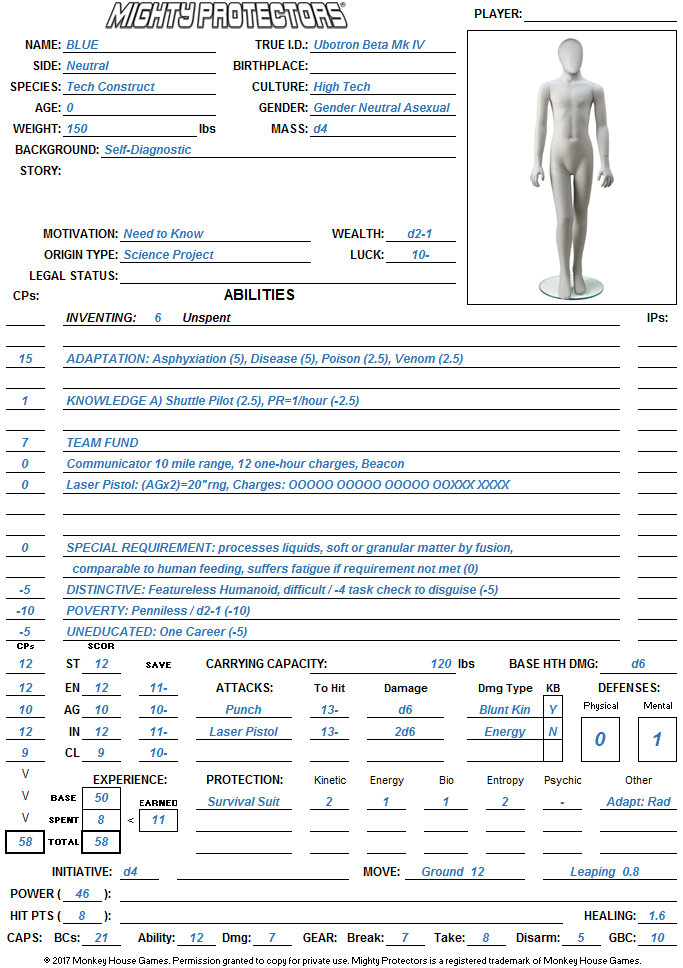 
Lugzug is a character that I created for another of Jeff's campaigns: a Low-Power one set on the planet Geos.

Character Background: Don Trebewski was a long-haul trucker based in Hoboken, New Jersey. While driving late one night down an empty stretch of highway, a Psynax spaceship flew down  and fired on Don's truck, disabling it. Don survived the resulting crash but was knocked unconscious.

When he finally awoke, he found himself on an alien world and, much to his initial shock and disgust, had been turned into some kind of monster. He would later learn the truth: that a group of Psynax renegades had kidnapped him, transferred his consciousness into the body of a troll, and left him on the planet Geos.

Don eventually came to terms with his situation and has become something of a local hero.

The Lugzug character write-up is by B.K. Adams 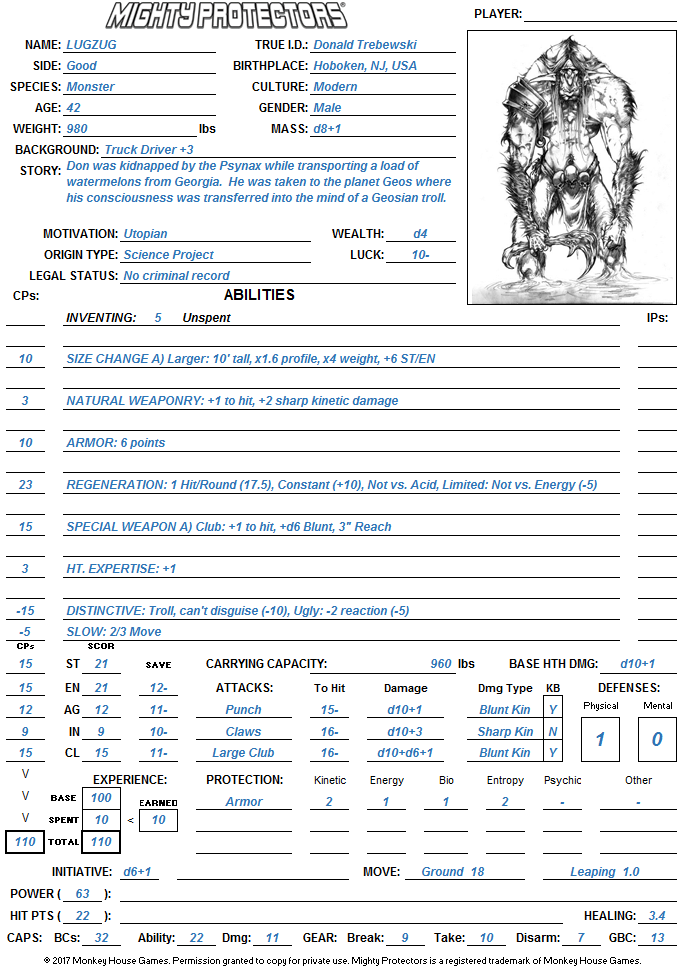 
Zorrinayr is a character that I created for Jeff's Primal Fantasy campaign. He is a young dragon, from the Dragon Vale, who has set out on a quest to discover the wide world.

Zorrinayr is a magic user, and carries his spell book with him (see arsenal below). He almost always memorizes his shape-shifting spell as he often deals with humans and does not want to alarm them about his true power and size.

The artwork shown on his sheet is off the internet; the artist is unknown, but no challenge to copyright is intended.

Zorrinayr the Warmhearted is copyright 2018 by B.K. Adams 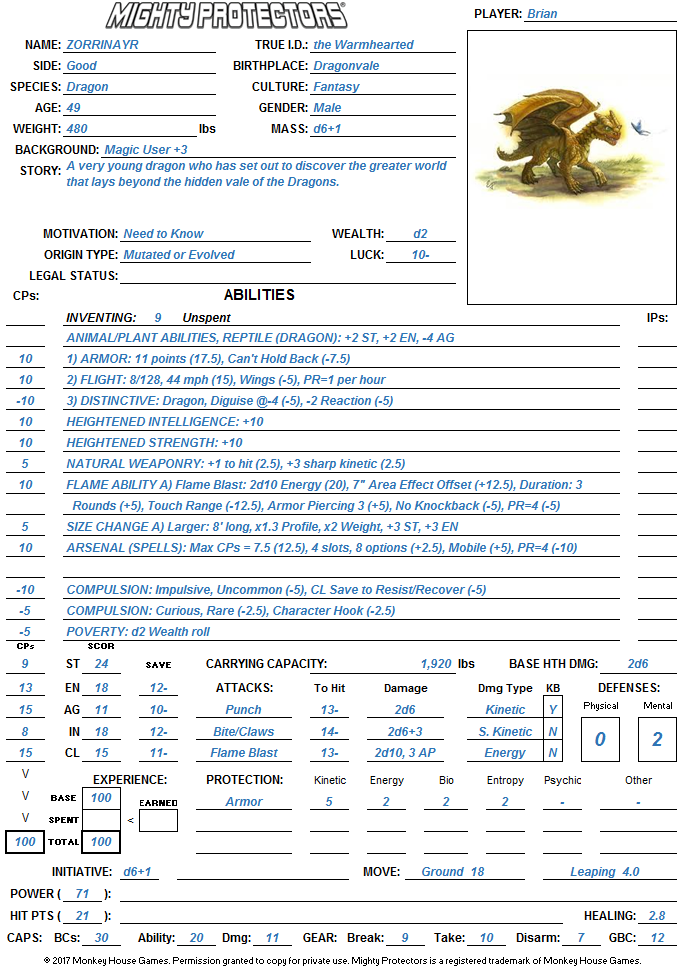 
Hardpoint is a character that I initially created for my brother's campaign, using his homebrew Ultraverse rules. Here, I've converted him to the Mighty Protectors rules.

Hardpoint is a character one might get if you crossed Spiderman with Iron Man: a wise-cracking teenager wearing a powered-armor suit. Harry's closest high school friends are members of the Math Club and include: Noah McCloud, Ethan Albaugh, Abigail Green, and Jian Mei. Abigail, who is also a cheer-leader, has been trying to go on a date with Harry but so far it's never worked-out (his super-hero activities keep interfering).

He also works as a part-time technician at an electronics repair shop. His co-workers include: Adrian Kirby, Mary Walker, and Joe Caplan.

All of his suit's Abilities, except for Armor, are breakable. If he takes hit point damage, roll a d8 (re-roll if an 8 is rolled) to see which Ability is affected. Also note that in the character sheet shown here, I've added the Linked modifier to all of his abilities. This simulates the fact that he isn't always wearing a suit of high-tech armor. He must spend 1" of his movement to "activate" all of the linked abilities.

Hardpoint makes a good "vigilante" hero that licensed player-character heroes might want to track down, or might randomly run into if they are fighting against the Mob. Although he is considered a vigilante by the police, he is not a killer. When he defeats mobsters, he leaves evidence of their crimes and calls the cops.

Hardpoint is Copyright 2017 by B.K. Adams 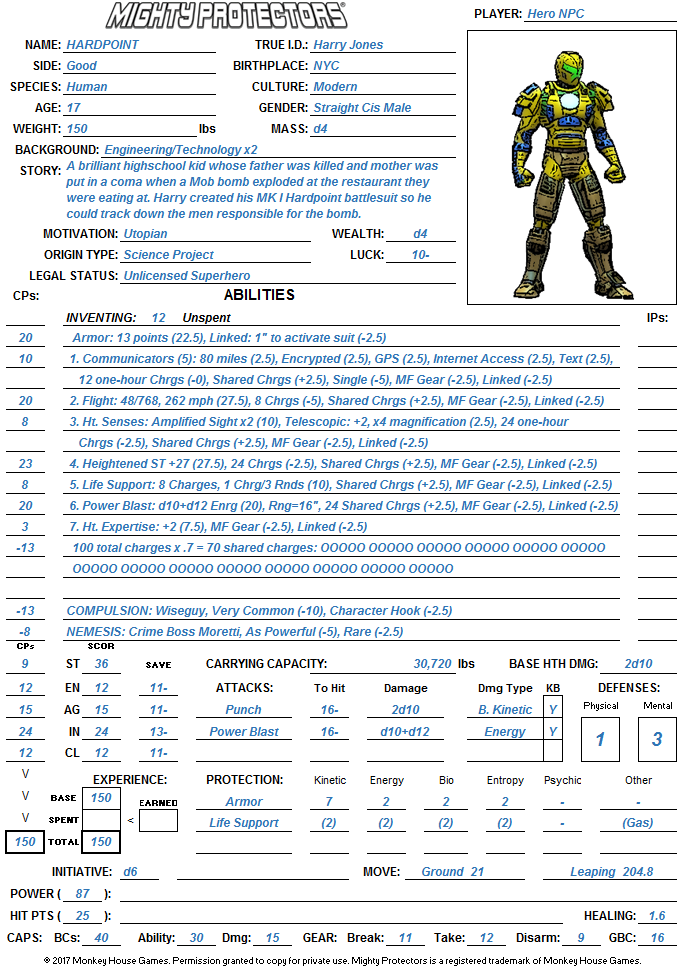 
Here is a character that I played in one of Jeff Dee's superhero campaigns in the summer of 2015. Also included below are sheets for his pet dinosaur and his vehicle. Kid Chronos, Tops, and Time Cube are copyright 2017 by B.K. Adams. 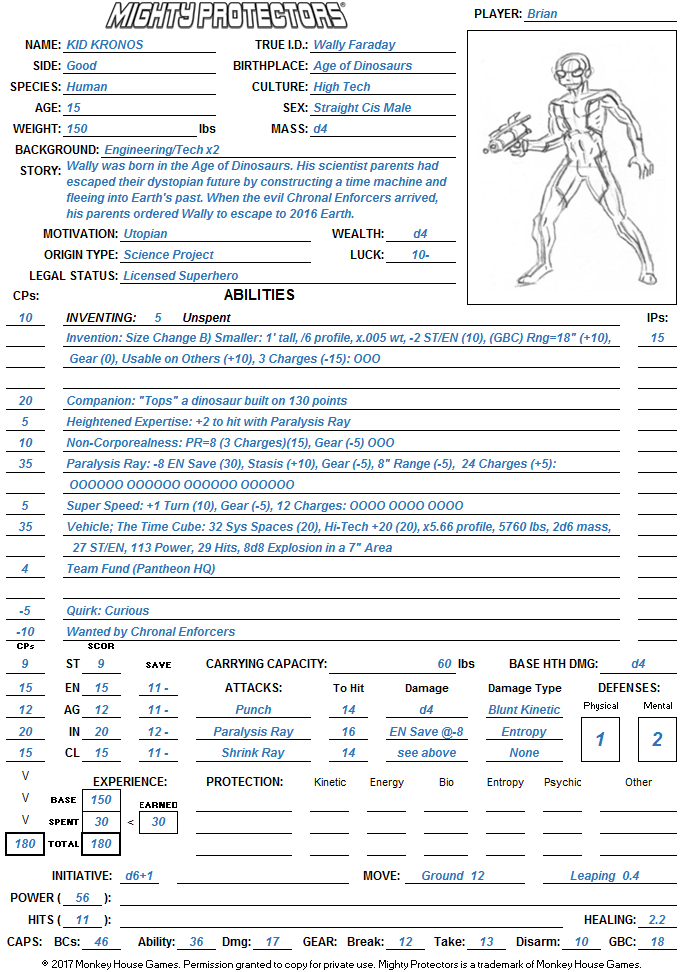 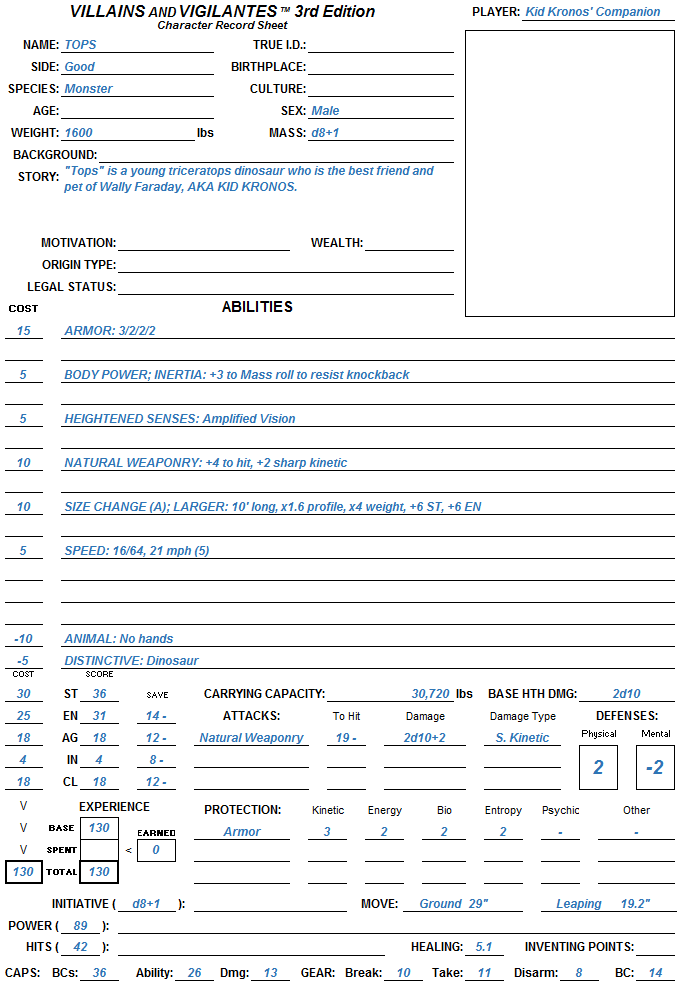 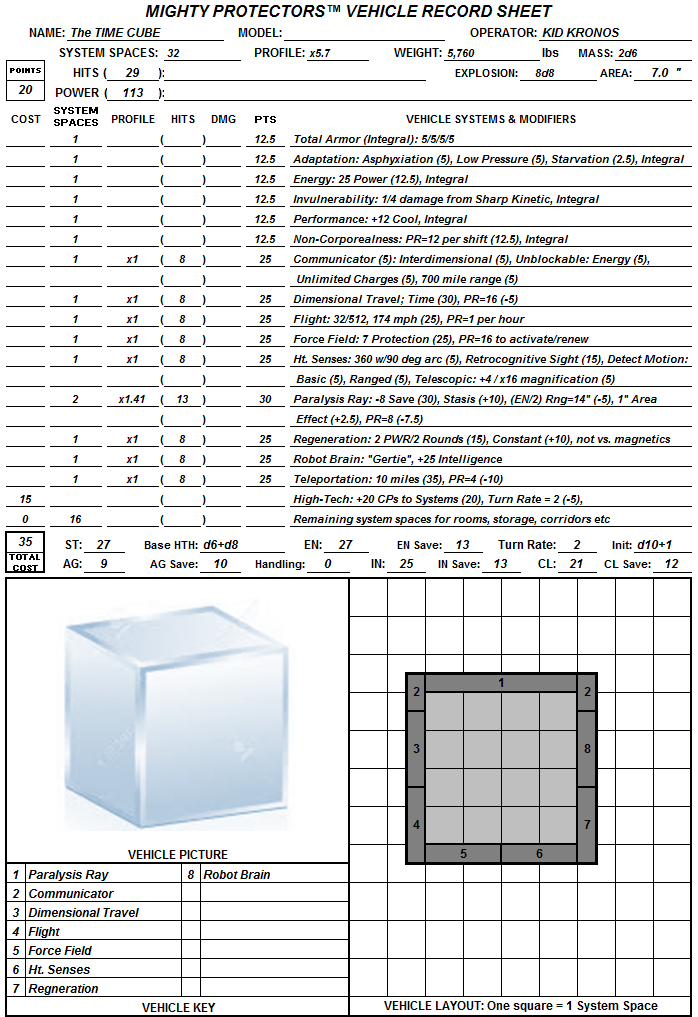 
Back in 2011, I randomly rolled this character in the V&V2.1 rules in order to playtest Jeff’s Intercime: Hostile Takeover module. I always considered him to be kind of a cool character, so I converted him to the Mighty Protectors rules.

With his Cosmic Awareness, Le Voyant makes a good NPC to provide information when the PC superheroes need help. 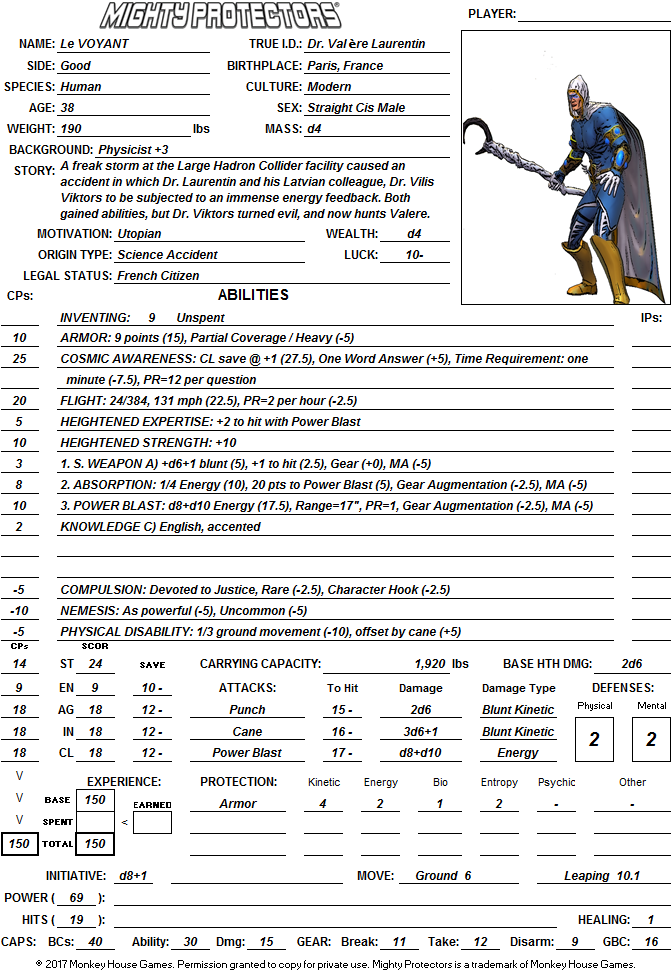 
Khelar started as a very low-powered character that I played in Matt Sheffield’s Sci-Fi / Fantasy Geosian Mighty Protectors campaign. By the time the campaign ended, he had become a devastatingly powerful swordsman. Geos is the “utterly typical world of European medieval fantasy” that is 17.3 light years from Earth (see MP 2.1.3). Matt’s campaign was a lot of fun and the MP rules work great for a fantasy setting. Here is a PDF of his character sheet.

You may want to use Khelar as an NPC in your own Mighty Protectors campaign. If so, he has come to Earth and your major campaign city, either through magic or science (he might have hitched a ride on a Psynax spaceship).

On Earth, he resorts to his basic personality type — that of an adrenaline-junky thief. He would learn at least a Mixed Culture while on Earth, drop the “bird net” points, and he would start using his skills and magic items (cloak of invisibility, necklace of super-speed) to begin robbing wealthy individuals. He would also likely gain CPs of Wealth and live in a posh penthouse apartment. 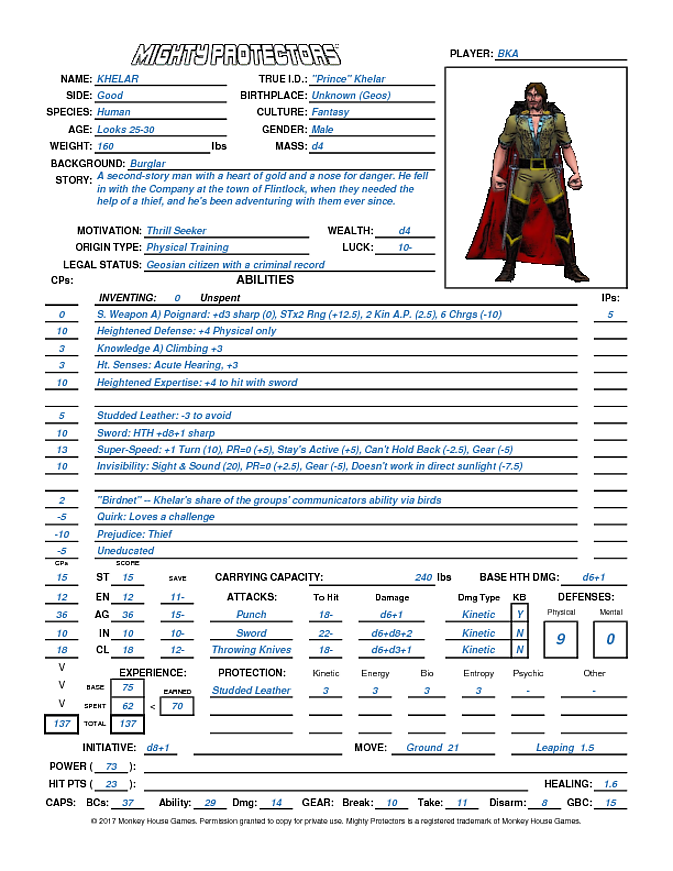 
“X-39” is a character that I only played twice. He was randomly rolled, created for a “monsters” campaign that Jeff only ran twice (but who may eventually come back to at some point).

X-39 was the project number he was given by the government scientists who were studying him at their secret installation in the mountains near Seattle, Washington. His real name is indecipherable by humans.

For years X-39 has been having dreams of Mother Enyo, dreams that led him to Earth. 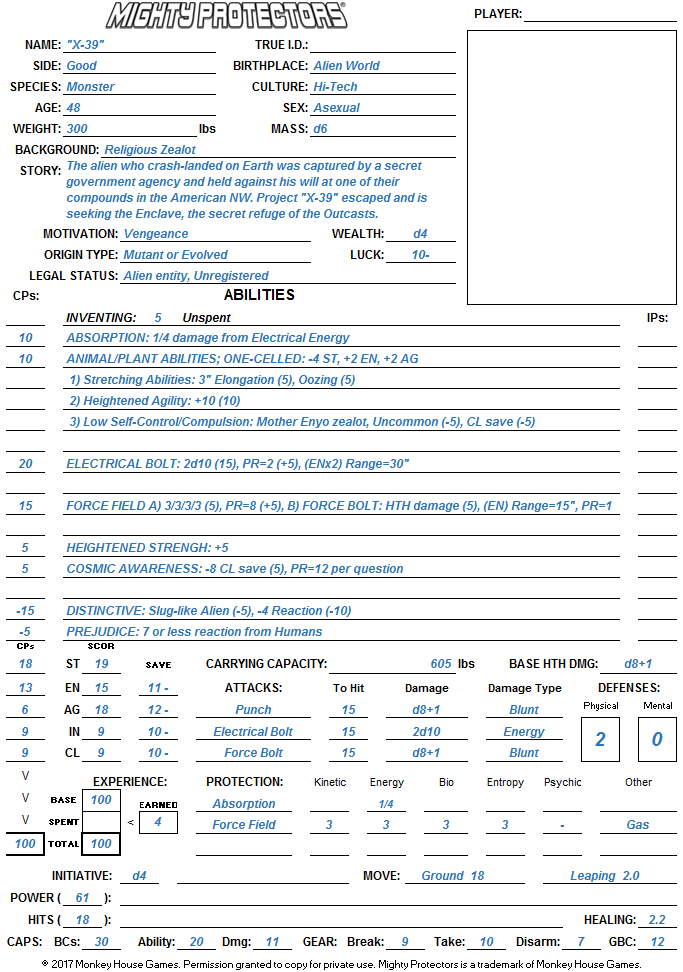