Here's a short video of me showing how super hearing works in v10 of Foundry. This is done  with one of the hero PCs in my Mighty Protectors campaign: https://youtu.be/d7dHjzaAYeA

This video shows how status effects can be applied to the tokens.

Hi, guys. Here is a link to a video of a hero PC walking around the team base. The campaign was started about a year ago and I've been running it almost every two weeks. The campaign is a "modern-day" superhero campaign set in New York City.

The heroes' team name is "The Strangers" and their base is located on an abandoned island on the East River.

I was initially using the  Roll20 virtual table top for this campaign but I quickly switched to Foundry VTT, which I found to be a superior system.

Anyway, I did not edit this video -- it is long and has some pauses and/or mistakes -- but hopefully you will find it informative.

Joanna Cameron, the actress who played Isis on the 1970's  Saturday morning show "Isis", just passed away. So, in her honor and as a tribute in my own small way, I present Isis as a V&V3.0: Mighty Protectors superhero.

To transform into Isis, Andrea Thomas pulls out her amulet (hidden under her dress) and says the phrase "Oh, Mighty Isis!"

Because Isis has such a vast array of powers, I used the Arsenal ability with Mobile and Gear modifiers to simulate the amulet! In order to activate any of her abilities she must speak a rhyme. For example, every time she needs to fly she utters the phrase: "Oh, zephyr winds on high, lift me now so I may fly!" All of her abilities are like this, which is why every arsenal slot has the Requires Speech modifier.

Isis likely has many more abilities than the ones listed, but the ones that I saw on the show are in the arsenal as presented. There are a lot more unfilled slots and options, if you want to add more. 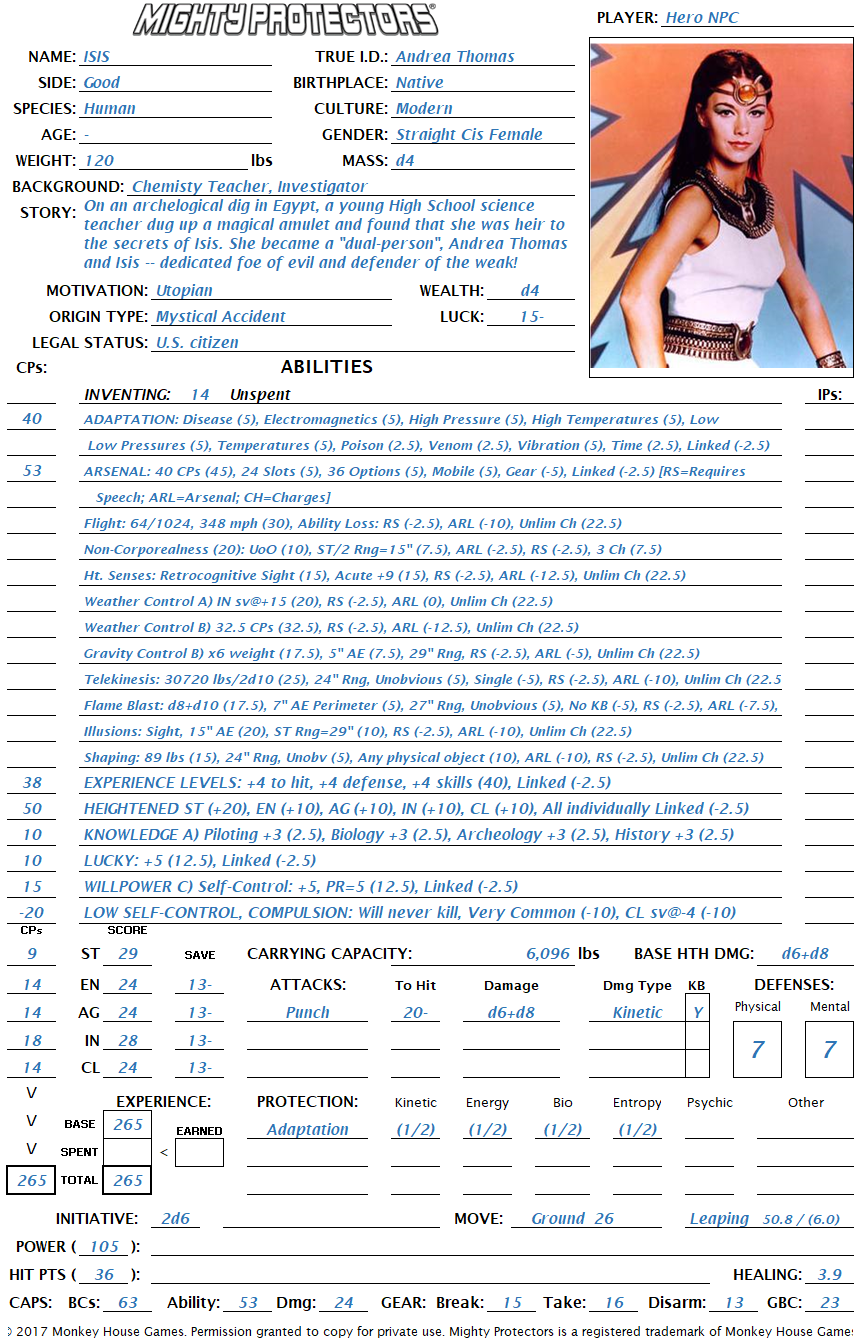 I've got a new character under the "My Mighty Protectors Characters" page. Her name is Inertia, a starting 106 CP hero in Jeff Dee's new superhero campaign. You can see her write-up here.

Here's a vehicle write-up for the SN9 SpaceX rocket that is being tested down in Boca Chica, Texas.

Note that this is not terribly realistic but will work for your V&V3.0: Mighty Protectors campaign if you want to have this rocket be a part of an adventure! 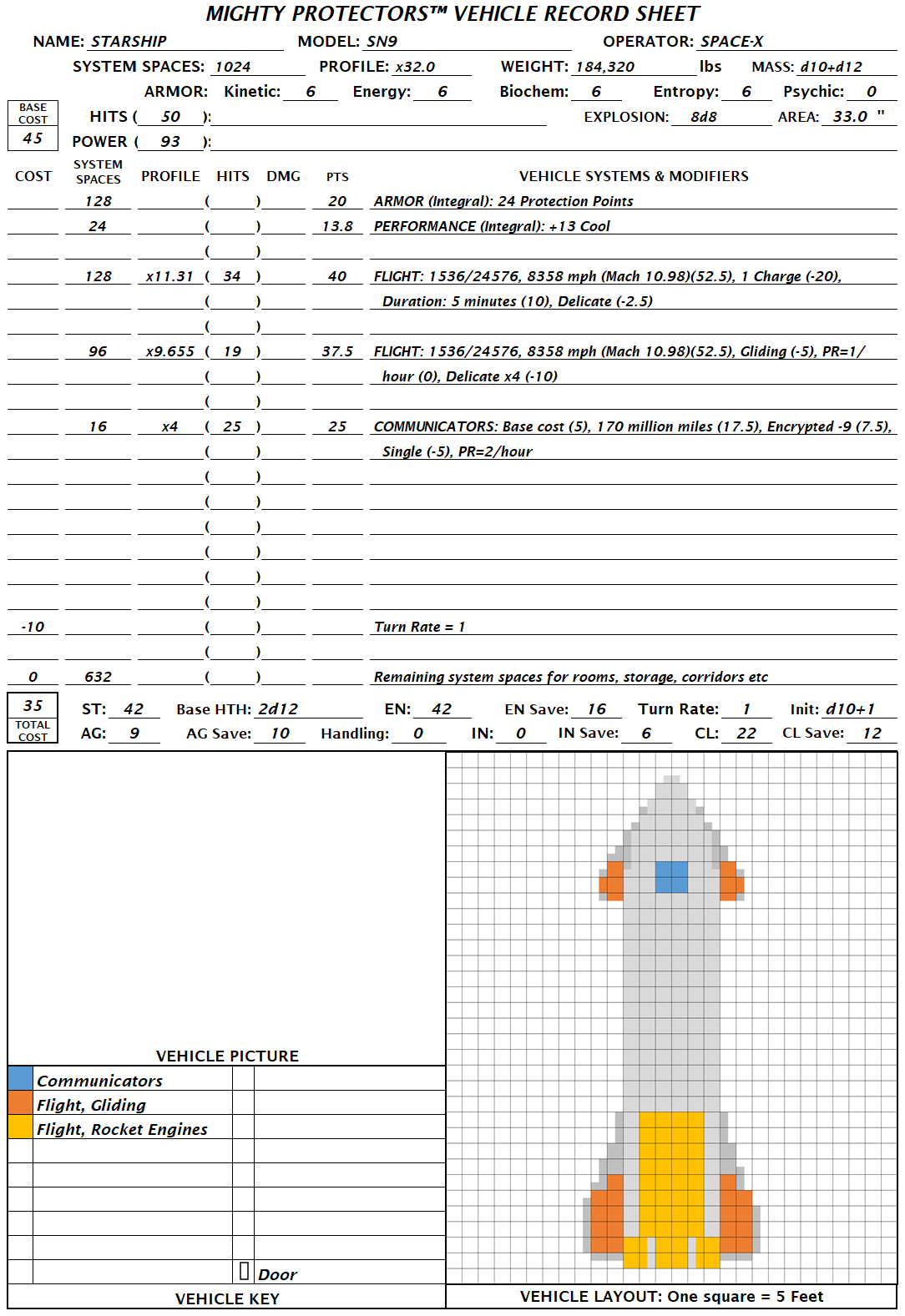 SPOILER ALERT!
Season 2, Episode 1 of the Mandalorian features a cool monster -- the Krayt Dragon. So, here's my Mighty Protectors write-up of it, although this version has to be a smaller version than the one shown in the show because Size Change A) Larger only goes to a maximum of 61 feet.
The Krayt Dragon doesn't have a great chance to hit but remember that its two main attacks, biting and acid spray, are both area effect attacks -- which get a +6 bonus to hit.
Please note that the Tunneling ability comes from the New MP Abilities document that can be found at: http://monkeyhousegames.com/wp-content/uploads/2019/05/New-MP-Abilities-4-2.pdf
Krayt Dragon The last superhero write-up on my list of iconic heroes for Mighty Protectors is the Winged Warrior! 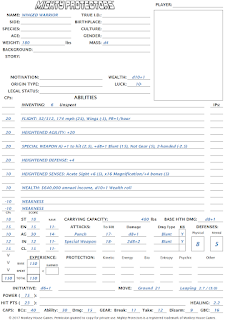 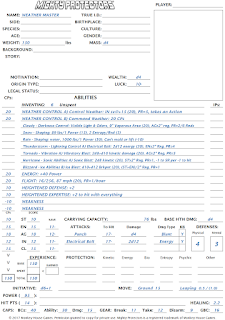 Next up on my list of iconic superheroes for Mighty Protectors is the Vigilante!
This hero's abilities include: Arsenal, Special Weapon, Heightened Expertise, Vehicle, and Natural Weaponry. The last ability could be one of the following: Heightened Initiative, Heightened Defense, or Knowledge.
The Vigilante's arsenal includes various weapons and devices including: bullet proof vest, night-vision goggles, grenades, combat knife, radio communications, and a grapnel gun.
The Vigilante's vehicle is an armored van that includes a souped-up engine, a front mounted heavy auto-firing gun, and other devices.
Vigilante 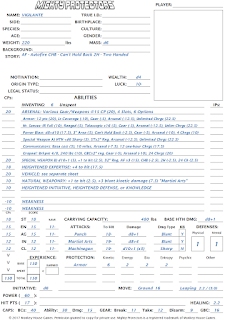 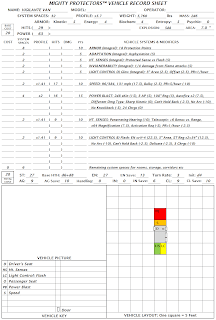 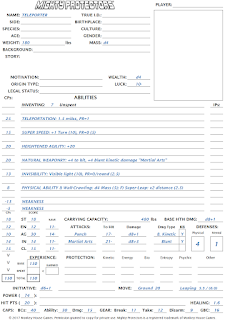 The Swordsman is next on my list of iconic superheroes for Mighty Protectors! Although the name implies that this hero is male, the swordsman may be any gender.
This hero's abilities include: Special Weapon, Reflection, Heightened Agility, Heightened Expertise, Armor and Heightened Attack.
As the name suggests, the Swordsman expertly wields a magical (or hi-tech) sword that can be summoned at will. Using the Reflection ability, the Swordsman is able to reflect certain ranged attacks.
Suggested weaknesses include: Dark Past, Compulsion (Low Self-Control), and Special Requirement (drugs or alcohol).
Swordsman 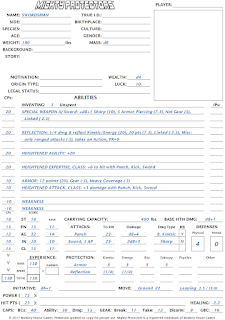 Next on my list of iconic superheroes for Mighty Protectors is the Super Spy!
The core abilities of the super spy include: Natural Weaponry (martial arts), Heightened Defense, Heightened Agility, and Special Weapon. The lesser abilities include Grapnel and Knowledge.
Suggested weaknesses include: Low Self-Control/Compulsion, Nemesis, and Dark Secret.
Super Spy 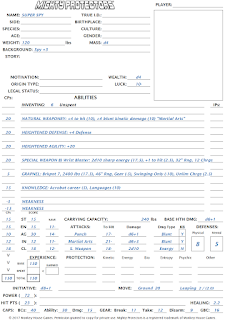 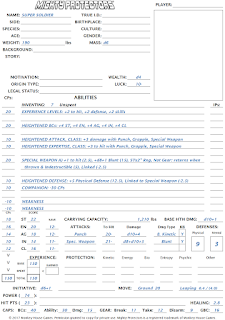 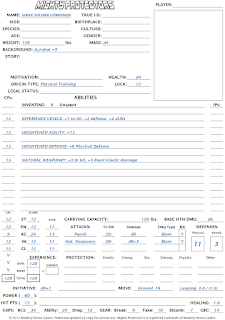