The first iteration of the Marvel superhero named Nova was Richard Rider, a down on his luck 17 year old teenager and NYC high school student. Nova Prime Centurion Rhomann Dey, the last surviving member of the Nova Corp, randomly bequeaths Richard with his powers. Nova makes its debut in 1976. 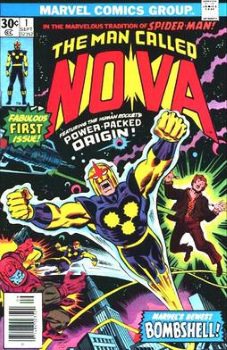 In this pic, Richard is recalling how he got his powers: 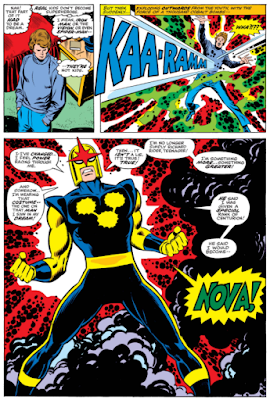 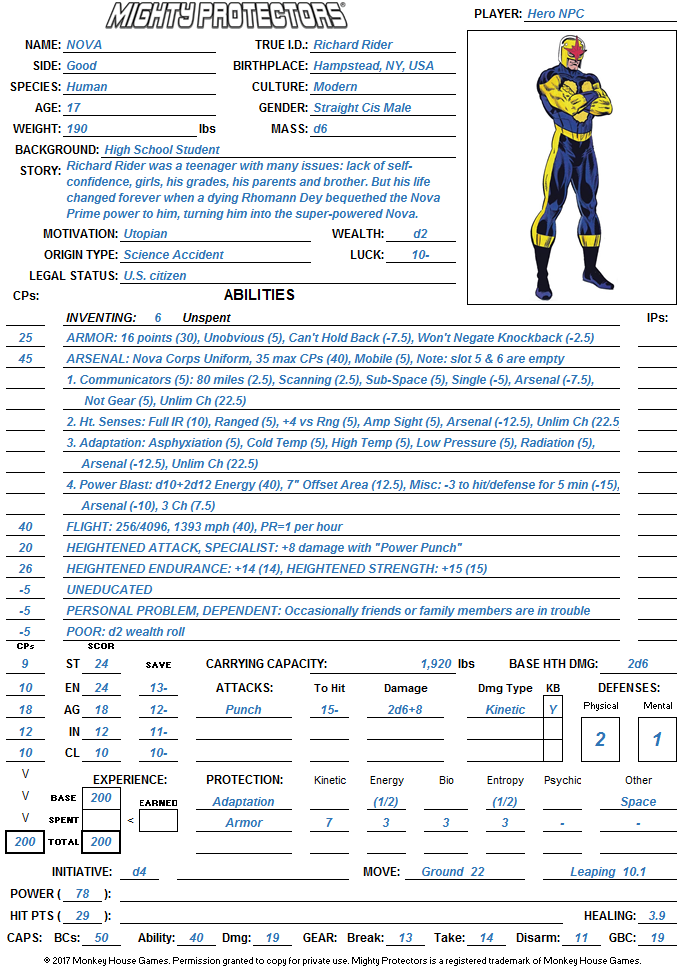 My write-up is based upon the first 10 issues of the comic. Below I give reasons for why I chose certain stats, abilities, or weaknesses:

I used Arsenal to emulate the powers of his Nova Corp uniform. I did this mainly to save CPs, although it did end up being 5 CPs over the Ability Cap. His radio communications, his ability to see in the dark and his resistance to heat and cold, are reflected in the first three arsenal slots. The last slot is an ability that he is described as having in later issues. Future ability slots would include Dimensional Travel (to Hyperspace).

Determining his MP Strength was a bit problematic: in one issue he is shown briefly holding up a building to save his friends. In another issue he is shown as being unable to stop a runaway truck. In the end, I went with the comic when Richard says he "has the strength of ten men." I make up for his relatively weak Strength by giving him Heightened Attack. This simulates his "Power Punch."

Because Rich is still a high school student and complains a lot about how he isn't good at anything, I gave him the "Uneducated" weakness.

Edit #1: Fixed a math problem (had to lower his IN). Fixes are shown on the PDF.

Nova is a trademarked owned by Marvel Entertainment Group and is used here for commentary purposes under the Fair Trade Act.
Posted by bk adams at 7:41 AM