I had been reading old "Bronze Age" Avengers comics and in issue #158 the heroes fight the villain Graviton. I decided to stat out the avengers shown in this comic using the soon-to-be published V&V 3.0/Mighty Protectors rules. Their character sheets are shown below: 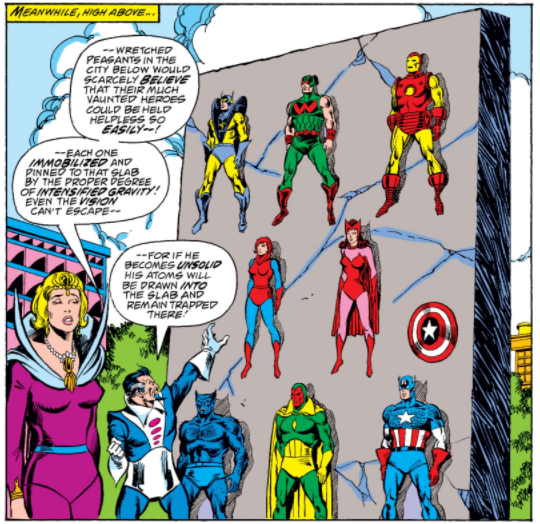 The Beast was one of the original X-Men but left that team and joined the Avengers in the early 1970's. In the original X-men, the Beast was their strongest member, but among the Avengers he's not nearly as strong as Thor, Wonder Man, Iron Man, or the Vision -- but he's much stronger than Yellow Jacket, Wasp, and even Cap. In addition to his super-powered physical traits, Hank also has "genius" level intelligence and is a master of many different scientific fields. 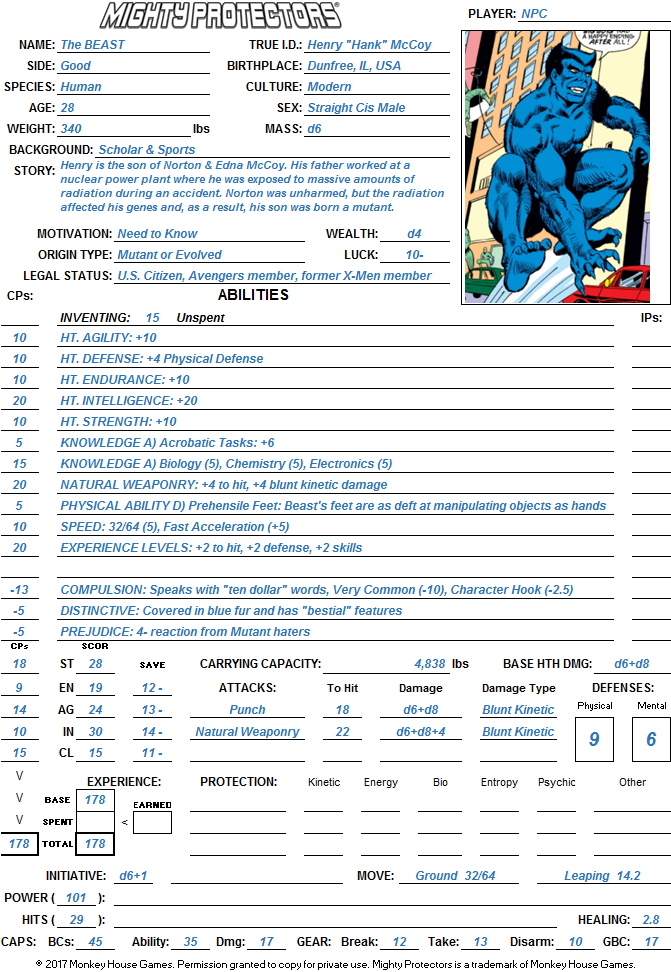 The super-soldier serum was supposed to bring a human to "peak human capabilities". Peak human stats are not defined in Mighty Protectors but it's likely around the 18-20 range. If Cap pushes his strength he can lift 960 lbs., which is pretty close to what is considered humanly possible, and still move at 1/2 movement. Cap's shield has almost never been broken or destroyed, and I thought about making it just a "special effect" of Heightened Defense, but in the end I went with the Shield ability and Special Melee Weapon to model its properties. 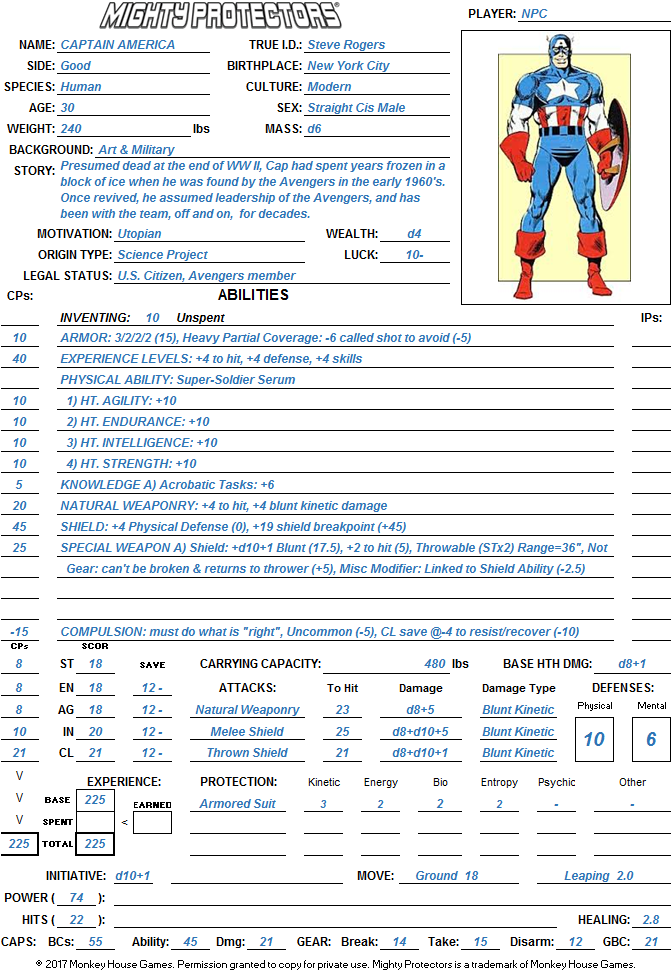 Iron Man's armor does so many things in the comics it can be daunting to model it in a game. In the Iron Man comic books, his armor was shown doing all sorts of things: hologram projection, voice distortion, fire extinguisher, magnetic ability, and even roller skates! But in the Avengers, he doesn't ever seem to use those abilities, so I did not include them. I looked up the Mk 5 Iron Man armor, which is what he wore in the 1970's, and I learned that Tony built his armor with force fields to "make the armor rigid". Since protection abilities stack in Mighty Protectors, that made modelling his armor a bit easier. 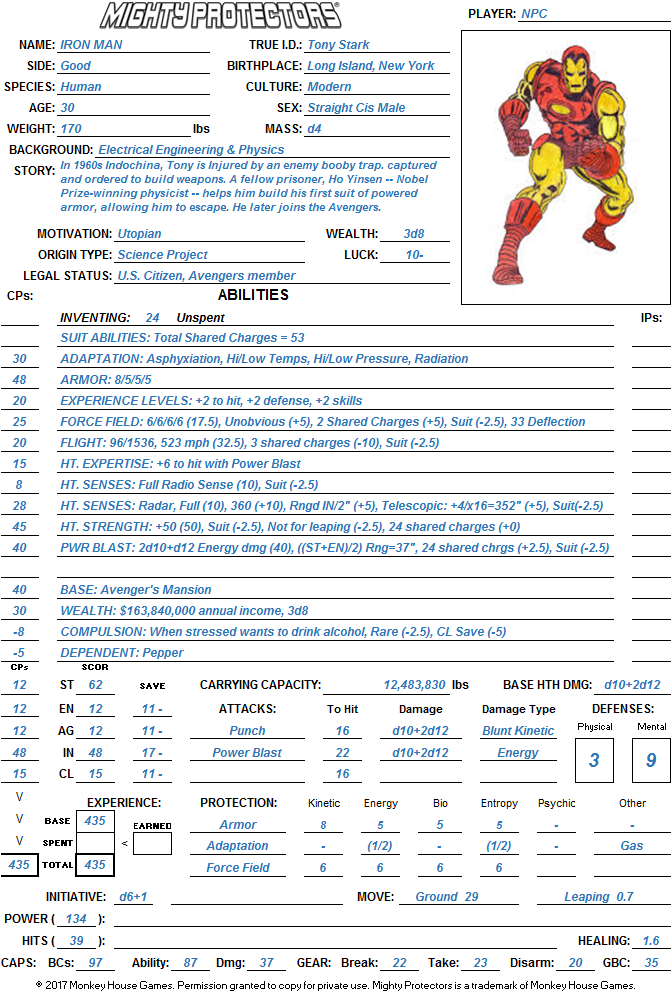 The Scarlet Witch's primary ability is her mutant "Hex" power. This super-power requires her to use her hands, seems to affect an area, and almost always affects objects and not individuals. I looked through a lot of the Avenger comics looking for instances where she used her "mutant hex" power and came up with the list shown below on her sheet, but it is by no means exhaustive. 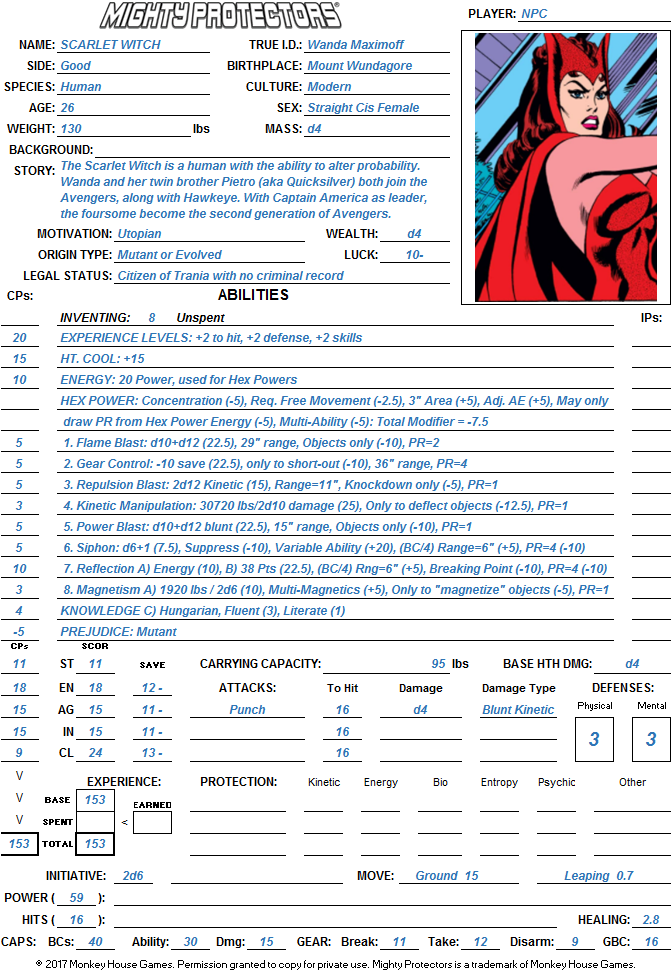 The Vision's abilities are pretty straight-forward and easy to model with Mighty Protectors. His stats, on the other hand, are debatable, but he needed to be close in strength to Iron Man. He was never shown as being particularly hard to hit so I modeled his incredible quickness as heightened expertise. His stats are shown as if he were using his density increase ability. I haven't yet read an issue showing him with perfect memory recall, but if I do I'll add it to his list of abilities. 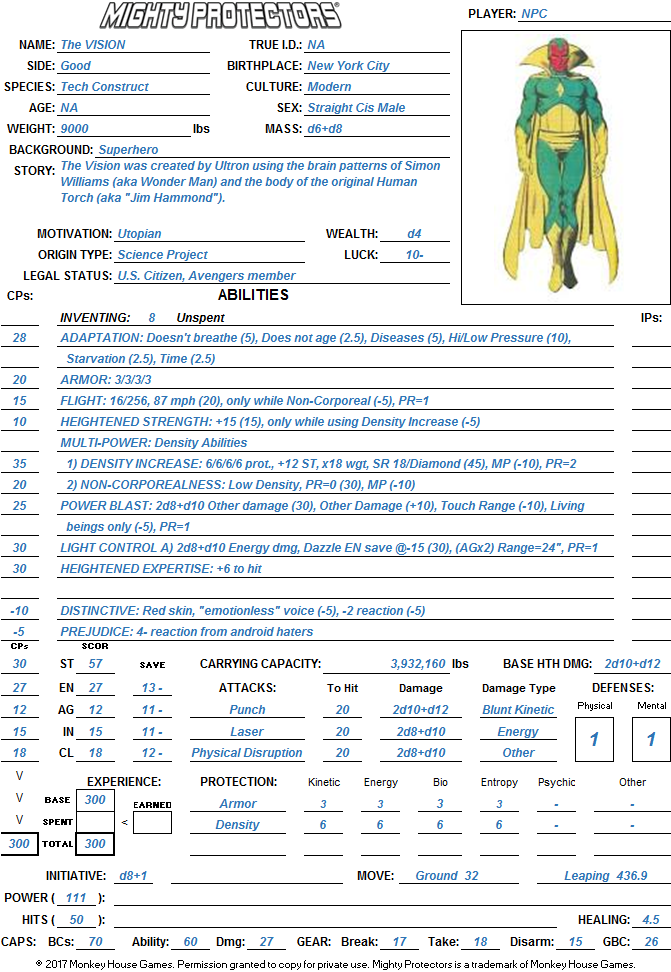 First he was Ant-Man, then Giant-Man, then Goliath and by the time Yellow Jacket debuted, Dr. Pym was on his fourth superhero iteration. Modelling him was fairly straight-forward although one can always argue just how much (or how little) of an ability he should have. Dr. Pym is described as one of the smartest individuals in the Marvel Universe, so I gave him a really high level of intelligence. His stats are adjusted to account for his Size Change B) Smaller ability. 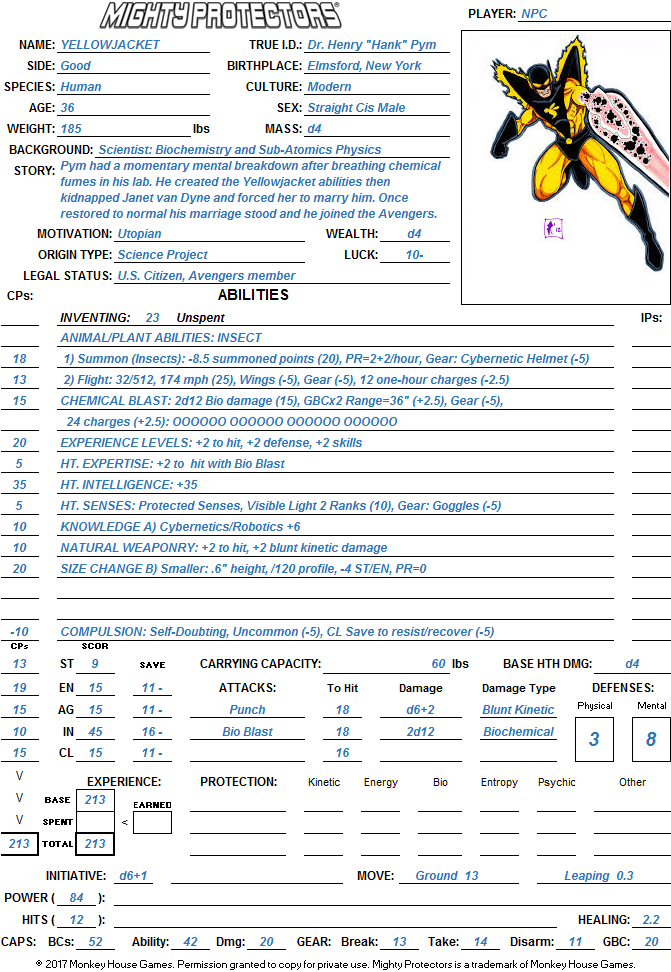 The wonderful, winsome Wasp was probably the easiest character to model as she is basically a wealthy human woman with a few scientifically created abilities. You could argue that she should also have the ability to talk with and/or control ants, but I couldn't find an issue of the Avengers where she actually used the ability -- so I left it out. Her stats are shown as if she were shrunk. 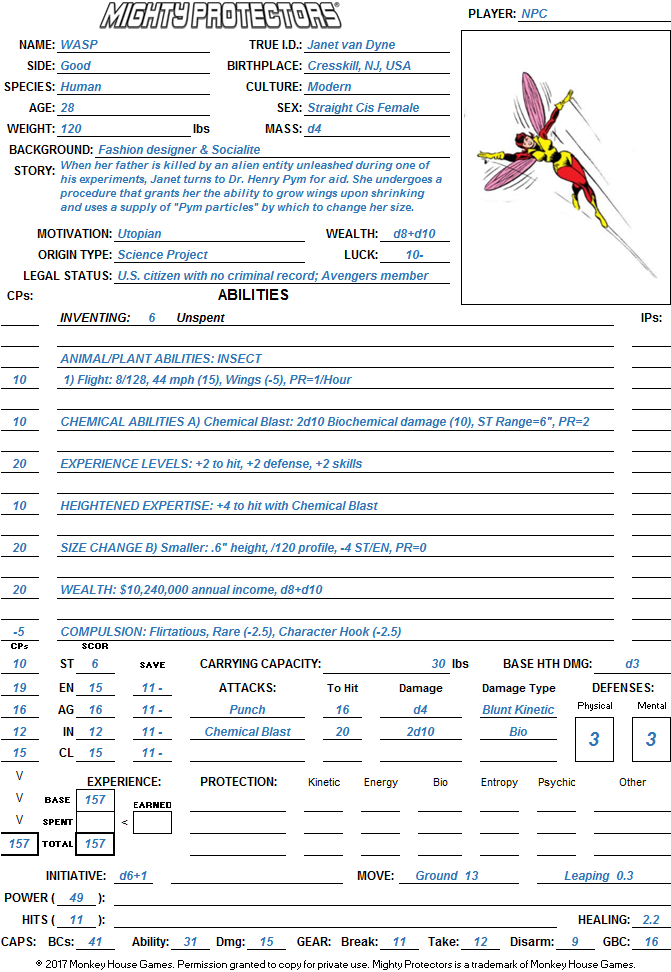 Wonder Man beat the Avengers in Avengers #9, so he had to be very tough. After he comes back to life and shortly thereafter joins the Avengers, he gets into a fight with the Vision and is winning before the fight is stopped. In another issue, he fights with and beats the Sub-Mariner.