New MP Ability: Base B) Grounds
This new V&V3: Mighty Protectors ability allows a character add a "grounds" area around his base.

Sensors, traps, "pop-up" blasters, and other systems can be placed on base grounds but must be part of the Base A) layout.

The CP cost and accompanying size is shown on the chart below. 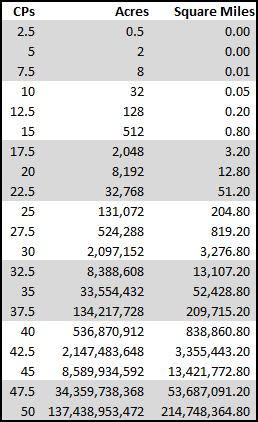 .Notes:
1. The existing Base ability becomes BASE A) HEADQUARTERS.

New MP Ability: Physical Ability X) Body Part Removal
For (10) CPs, this ability allows the character to remove their body parts which continue to operate with no ill effects. It takes an Action to remove a body part.

A link, whose special effect is determined when the ability is bought, exists between the character and the removed body part. This link allows the character to control, and gain the benefits of, the body part at any range.

Separated body parts may move depending on their function. For example, a hand or arm may crawl, a leg may hop, and an eyeball may roll.

This is a Persistent Ability. PR = 0 per round.
A) Leaping (Homebrew)
Determining how far a character can leap is a multi-step process that uses the chart shown below. This change in how MP characters leap means the 'free' leaping for very strong characters is vastly reduced. If your character is really strong, he can still leap farther than a weaker character, but if you want him or her to leap miles like the Hulk then you will have to put CPs into Physical Ability F) Super Leap. 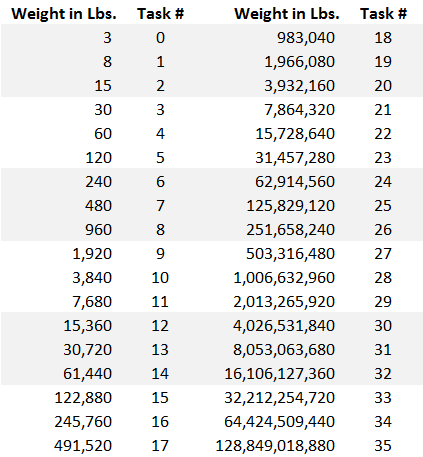 Leaping Notes:
1. Optionally, if the GM wants to add randomness to leaping distance, have the PCs roll their base HTH damage to determine their Carrying Capacity Task number. Even if the character fails to equal the Weight Task number, the minimum leaping distance is still 1".
2. Treat Size Change B) Smaller characters with 0 weight as if they weighed 3 lbs.

D) Companion (Theory-crafting)
Use the chart below for the cost. Companions do not gain experience.

E) Summoning (Theory-crafting)
Use the chart below for the cost. Summoned creatures do not gain experience. Summoning takes 5 minutes, PR=2 to perform, and PR 2 per hour to maintain. 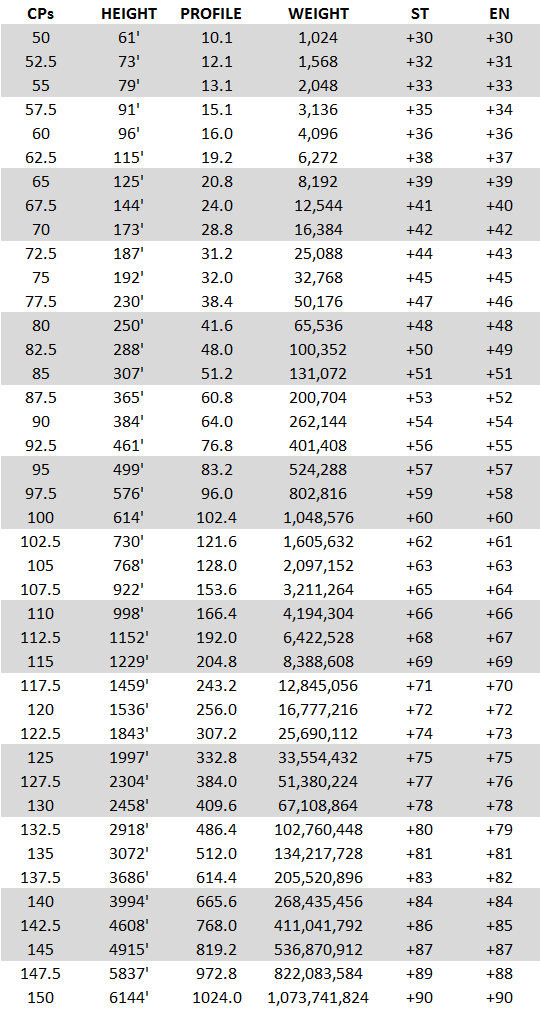 G) Microscopic Vision (Homebrew)
To simulate microscopic vision, buy it as if you were buying Heightened Senses: Telescopic Vision. See the chart below for size examples and corresponding range penalties:

H) Optional Motivations (Homebrew)
Listed below are optional motivation categories for heroes and villains in Mighty Protectors. Also note that over time a hero or villain’s motivation may change. For example, if a hero starts with a Romance motivation and the loved one is killed, the hero could then adopt a new motivation of Vengeance.

Self-Improvement: The hero is motivated to make themselves the best individual that they can be. These heroes are constantly training and expect others to be as prepared as they are.
Unwanted Power: The character never wanted to be a hero or to have super-powers.
Gain Acceptance: The hero wants to be accepted by society, by his or her peers, or by some other group -- and will do whatever it takes to “fit in.”
Indebted/Owes Someone: The hero owes a debt to someone else and must do everything in their power to repay the debt.
Loyalty: The hero is motivated by his or her undying loyalty to another individual or organization.
Romance: The hero is romantically interested in another character, usually another hero, and will endeavor to gain that person’s affection and trust.

Villain Motivations
Collector: The villain loves collecting things. What those things are varies from the mundane to the rare and powerful – and even super-powered beings.

These rules double the cost of MP attributes. They were never fully play-tested, so use with caution. These changes reduce a character's power and hit points, making it more difficult for power-gamers to construct 'combat monster' characters. The generally lower power, hit points, to hit chance, and defenses of characters constructed with these rules tends to speed up combat. The downside is that it is more complicated than the official rules, with many changes made to existing abilities.

A double-BC character sheet shows what these changes look like. Note: this sheet also uses the change to hit point calculation shown above.

Beginning characters receive +50 CPs to offset the increased attribute cost. However, the initial stats are somewhat lower (see chart below).


Heightened Attributes yield half as many points (+5 at Low power, +10 at standard power, +15 at high power).

SPECIAL WEAPON: The CP cost of the Accuracy modifier is doubled, from 2.5 to 5 CPs for +1 to hit. 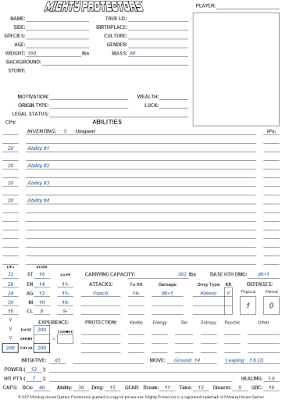 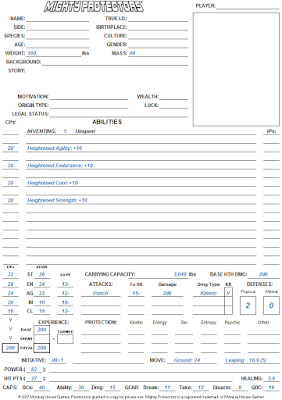 K) Life Support (Homebrew)
Life Support is a voluntary ability that automatically activates when needed. It is not gear by default, although it may be given the Gear modifier if desired. Similarly, the PR cost may be given the Charges modifier. In all other ways this ability functions like the official version.

For those who want to add a beauty component to their MP game, try using Attractiveness. This is a Continual Ability. PR=0 per hour. The reaction modifier can be used as a bonus for influencing others (see 3.1.1 Influence Tasks on pg. 103 of the MP rules). Note: the CP cost and bonuses are based upon the Distinctive Weakness.

Introduction
Many super-hero RPGs utilize game mechanics that allows PCs to re-roll dice, learn important clues, or in general override the game system to their character’s benefit. In Mutants & Masterminds and DC Heroes the system is called "Hero Points," in Savage Worlds Supers it is called "Heroic Bennies" and in Marvel Super Heroes it is called "Karma Points."

In DC Heroes and Marvel Super Heroes the system is tied in with character advancement (experience). In Mutants & Masterminds and Savage Worlds, the system stands alone and is not tied to experience.

For Mighty Protectors, what would such a system look like and how would it work? One could go the route of DC Heroes and MSH and tie the system into experience or use the stand alone system of the other rpg’s. There are pros and cons to both systems, but I think the stand-alone system is ultimately the better system for Mighty Protectors, so I’ll go with that and call it Meta Points.

Earning Meta Points
MP heroes start each game session with one Meta point. If the hero suffers a major setback, roleplays well, or performs a heroic action, he gains one Meta point. Add +1 Meta points for every (5) CPs of Luck the character possesses. Meta points reset at the end of each adventure.

Spending Meta Points
The hero may use as many Meta points per round as he possesses. Meta points may not be used when the hero is surprised or unaware. Possible uses include the following:
Meta Points Usage By Campaign Type:
Standard: 1-6
Gritty: 1, 2, 4 and only 1 Meta point per round may be used