Here's my MP write-up for the Umbrella Academy superhero known as Number Seven, a.k.a. The White Violin, a.k.a. Vanya Hargreeves. 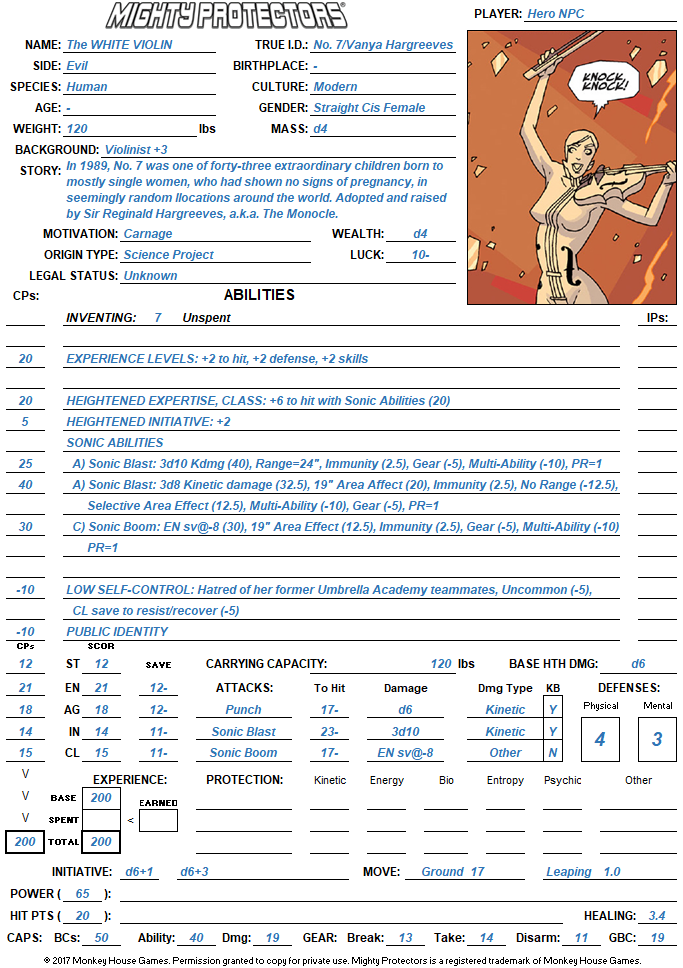 Notes:
1. This write-up reflects the Umbrella Academy comic, not the Netflix series.
2. Although it's not clear that it is in the comic, I included Sonic Boom as one of her abilities in order to round out her sonic powers and to make her an even 200 CPs.
3. The Conductor altered Vanya's body, creating her alter-ego of the villainous White Violin.

Here's my MP write-up for the Umbrella Academy superhero known as Number Six, a.k.a. The Horror, a.k.a. Ben Hargreeves. Aside from the four extremely powerful tentacles that emerge from Ben's chest, and that he was killed at some point, not much is known about The Horror. 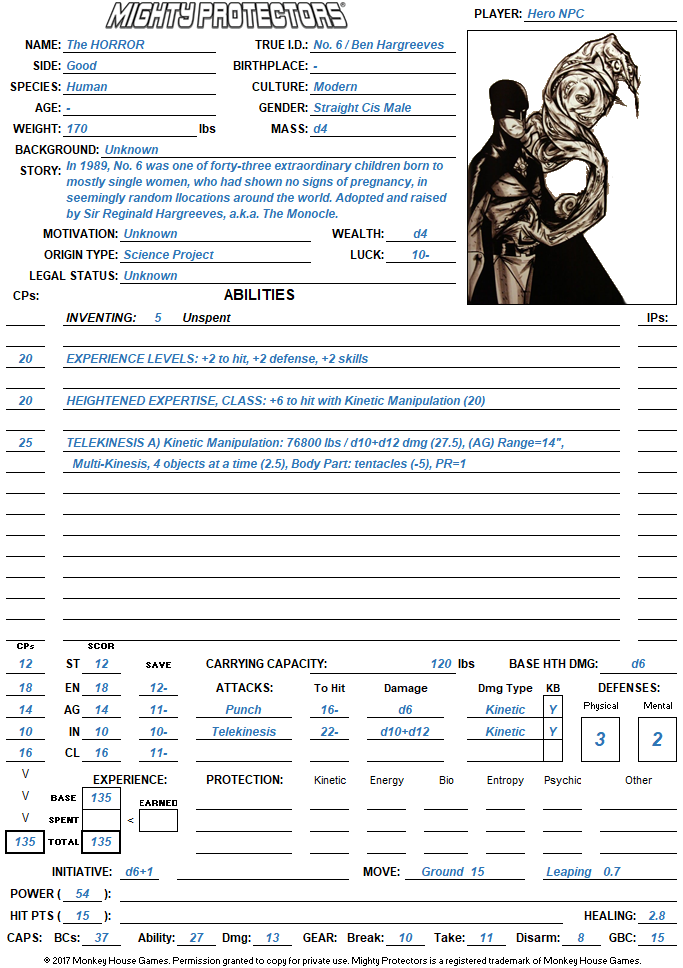 Notes:
1. This write-up reflects the comics, not the Netflix series.
2. There isn't enough material to know what possible other powers Ben may have possessed.
3. I gave Ben Heightened Expertise with his tentacles as a way of boosting his overall power-level. He's still less than 150 CPs, but this ability is certainly within reason.

The Horror is a trademark of Dark Horse Comics.

Here's my MP write-up for Umbrella Academy superhero The Boy, a.k.a. Number Five. 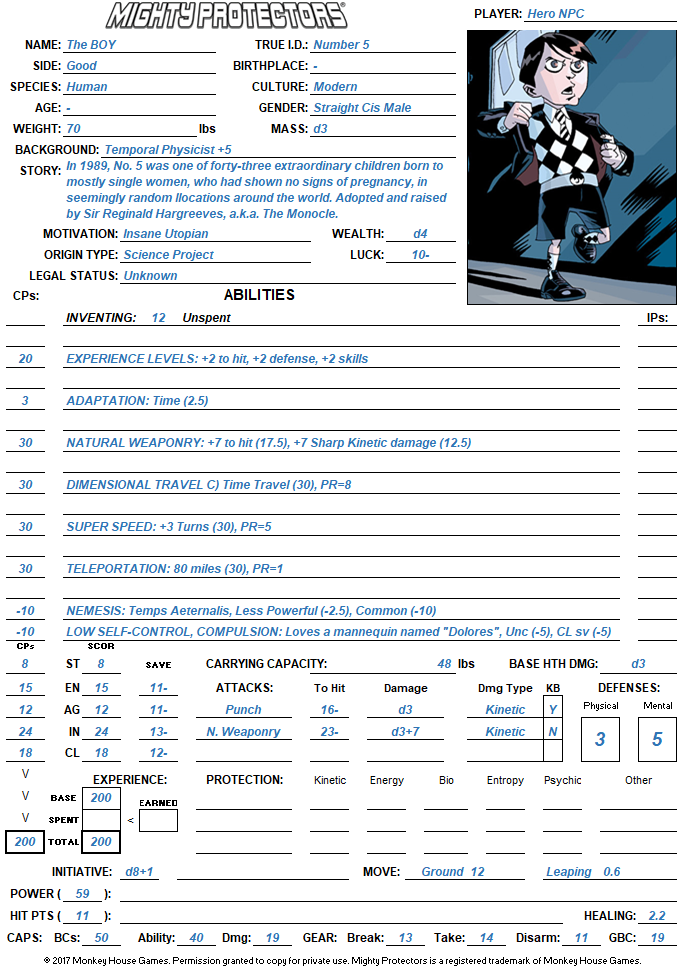 Notes:
1. This write-up mostly reflects the Boy's abilities as they are shown in the comic book.
2. I gave him a motivation of Insane Utopian. This reflects that fact that he wants to save the world, but he's willing to murder people to do so. Plus, he loves and talks to, a mannequin he named Dolores.
3. In the comics, he can use his hands as lethal weapons, cutting into his opponents skulls.
4. I also gave him super-speed to reflect his ability to teleport and attack multiple opponents almost before they get a chance to attack back.
5. In the comic, he is told that his cells are not aging, thus the Adaptation to Time.
The Boy, character and artwork, is a copyright of Dark Horse Comics.
Posted by bk adams at 1:26 PM No comments:

Here's my MP write-up for Umbrella Academy superhero The Seance, a.k.a. Number Four, a.k.a. Klaus Hargreeves. 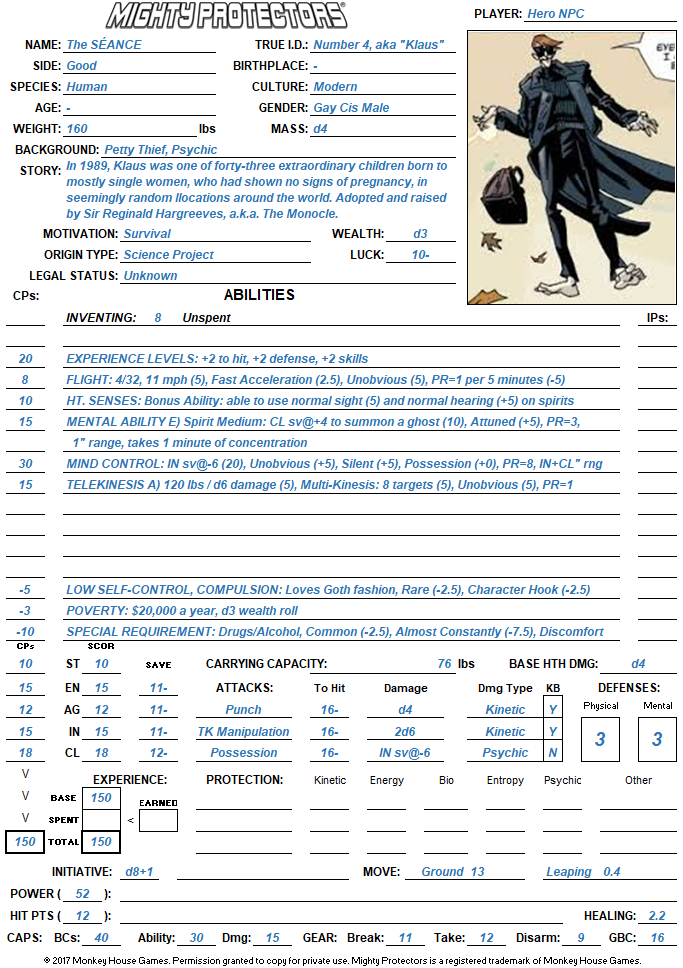 Notes:
1. This write-up mostly reflects Klaus's abilities as they are shown in the comic book and some of his traits from the Netflix show. I did this mainly because I have not read all of the comic books, but I have seen all of the Umbrella Academy episodes.
2. I used the "Bonus Effects" rules under Ability Modifiers (p. 87 of the MP rulebook) to simulate Klaus's ability to see and hear ghosts, because I feel that it is a minor ability.
3. I came-up with the Possession modifier for Mind Control. Possessing a target has advantages and disadvantages, so I made it a +0 modifier. Similar to Astral Projection, the character's body falls into a coma while possessing someone.
4. Existing MP abilities like Summoning, Cosmic Awareness, Retrocognition, et al., didn't really work to model his power of summoning ghosts... so I invented a new ability called Mental Ability E) Spirit Medium.
5. In the Netflix series, Klaus is gay, but it is unclear what his sexuality is in the comics I read. I went with the Netflix series in this case.

The Seance, character and artwork, is a copyright of Dark Horse Comics.
Posted by bk adams at 2:05 PM No comments:

In order to complete my write-up for Number 4 of the Umbrella Academy, I had to come up with a new Mighty Protectors ability -- Spirit Medium!

The character can summon a spirit of the dead. This is a unique Voluntary miscellaneous ability, with a range of 1”, a PR of 3 per use, and the character must make a task check based on their CL. It takes 1 minute of concentration to perform a séance. Any attack on the character which causes Hit damage or a failed saving roll while they’re activating séance causes a break in concentration, and prevents the Ability from being successfully activated at that time. Total cost (10) CPs.

The character may ‘push’ the CL roll by +2 to for an additional +2 PR. The character may also modify their CL save roll by taking more or less time, according to section 3.0.2.7 of the MP rules.

Example: The Seance, who has Spirit Medium with a CL save @16-, needs help figuring out an electrical device. He takes 1 Round instead of the usual 6 Rounds, taking a -6 penalty to the CL save task check. He will also push his Ability by +2, putting his chance of success at 12-. The GM deducts 5 from the characters Power score, and rolls an 11 -- success! The ghost of Nicolas Tesla appears and proceeds to help the hero.

1. I'm including this ability as its own post so that prospective GMs or players can find it using the blog's search function.
2. I tried using an existing MP ability for Klaus's ability to summon ghosts, but none of them felt quite right.
3. This ability may be used to summon up the ghost of any deceased individual, so long as the name (and possibly some background information) of the ghost is known.
3. This ability has not be play-tested.
Posted by bk adams at 10:48 AM 3 comments:

Here's my MP write-up for the Rumor, a.k.a. Number 3, a.k.a. Allison Hargreeves. She is one of the super-heroes of the Umbrella Academy comic book and Netflix series. 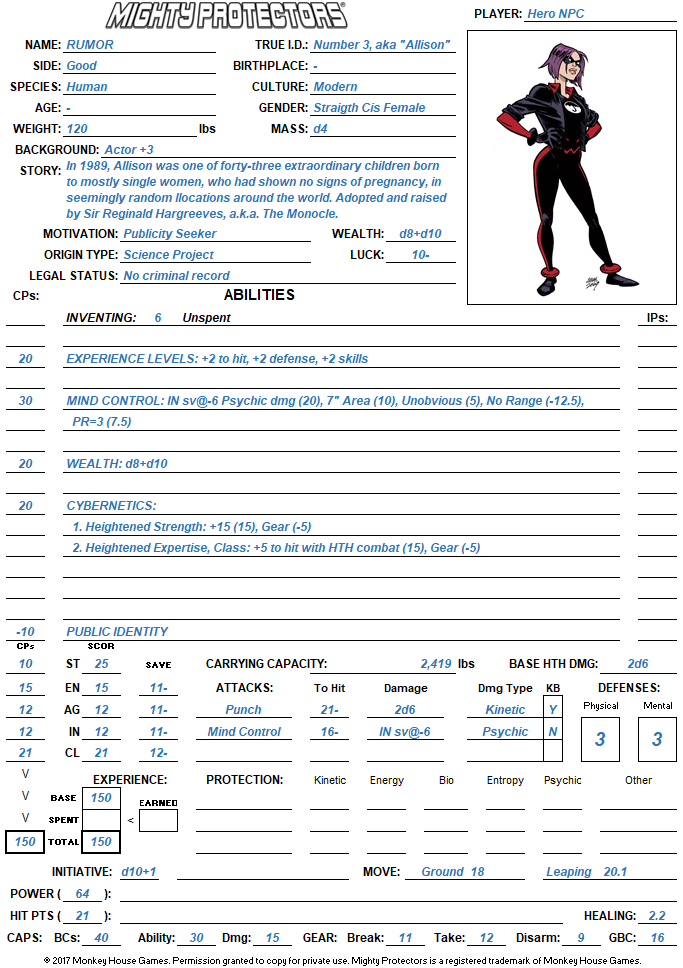 Notes:
1. This write-up reflects both the comic book and the Netflix series.
2. Her power in the comic is the ability to alter reality, an ability that is not currently available in the Mighty Protectors rules.
3. From the Netflix series, I gave Rumor MInd Control; from the comic book series she gets Cybernetics in the form of a hand.
The character The Rumor and the artwork shown is a trademark of Dark Horse Comics.
Posted by bk adams at 3:40 PM No comments:

Here's my MP write-up for Kraken, a.k.a. Number 2, a.k.a. Diego. He is one of the super-heroes of the Umbrella Academy comic book and Netflix series. 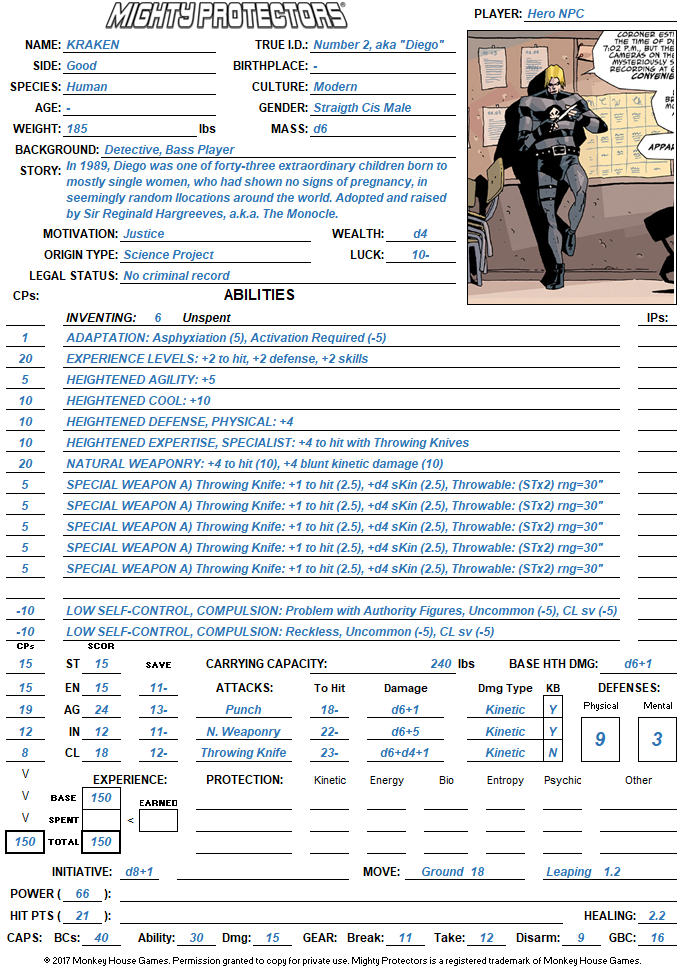 Notes:
1. This write-up reflects the comic book, not the Netflix series.
2. I guessed on the number of knives that I've given this character. In the comics that I've read, it's not clear exactly how many he carries.
3. I gave Kraken Adaptation: Asphyxiation, with the Activation Required modifier, because it is stated that "he can hold his breathe indefinitely".

The character Kraken and the artwork shown is a trademark of Dark Horse Comics.
Posted by bk adams at 9:39 AM No comments: