Scott "Disco" Scruggs has been an unlucky loser most of his life. His father was killed when he was still a child. His mother remarried but his step-father, who was often drunk and abusive, never liked him. Scott was bad at learning -- he hated school and skipped it as often as he could. He was eventually expelled from high school in 10th grade. He took the family car for a joy ride, which ended with the car being wrecked. His stepfather then kicked him out of the house and he began living on the streets. He had been drinking and smoking since he was ten years old, but he got into harder drugs in his 20's. He has been committing minor crimes most of his life.

As an adult, Scruggs became a handyman and a junker. He met "KT" ten years ago in the county lockup, and the two have been close ever since. KT's son, Elijah, lives with them both at their base, "Scrap Hollow."

Recently, though,  Scruggs luck has changed for the better. While scavenging for items after a major superhero-supervillain battle, he found a powerful artifact -- a magic wand. Once he figured out how it works, he's been using it to case potential places to rob by scouting it in astral form. Once he knows the layout of the place he and his cohorts -- his girlfriend KT and her son Elijah -- proceed to rob the place. 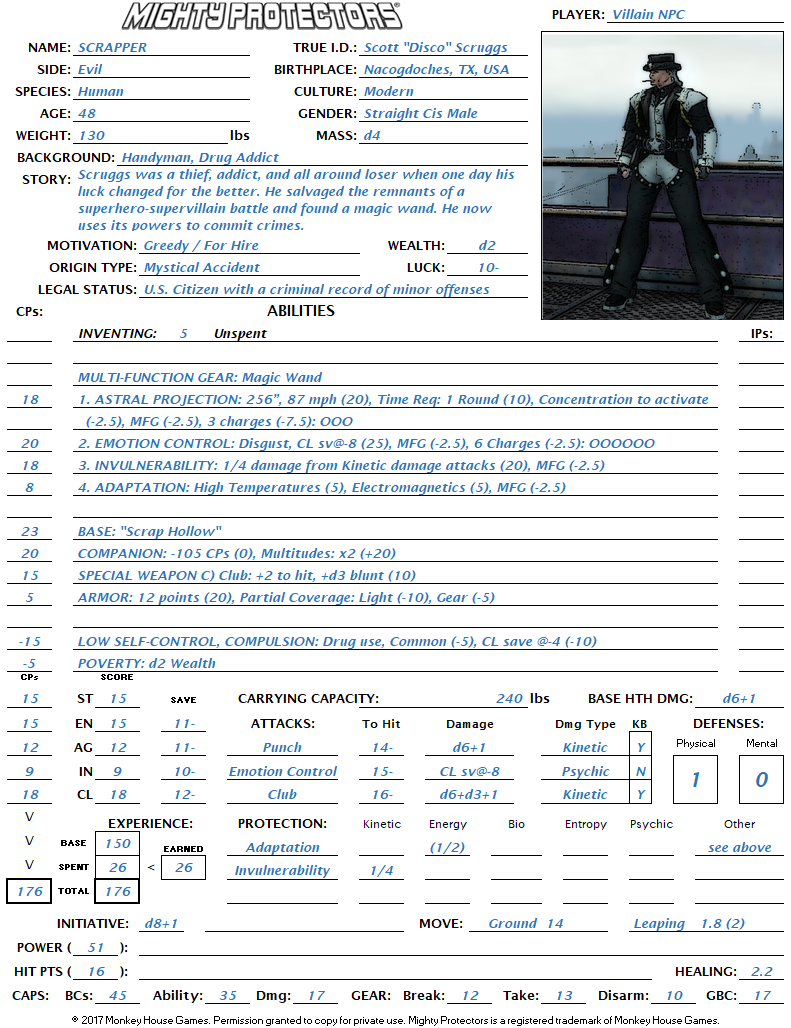 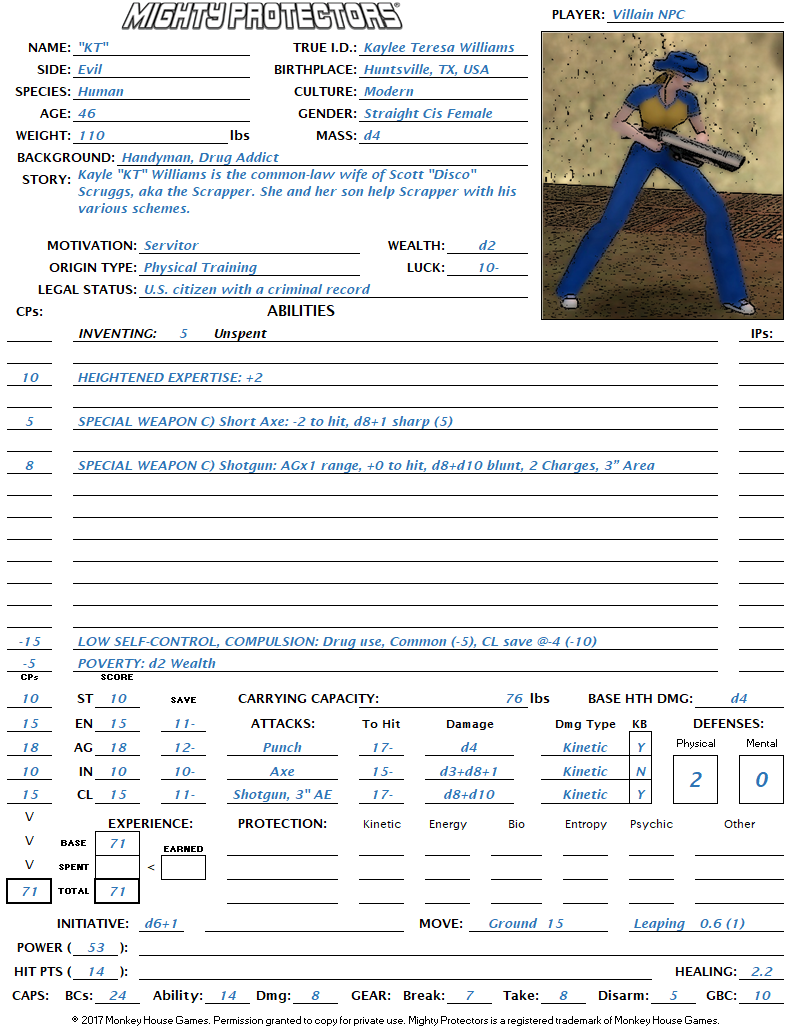 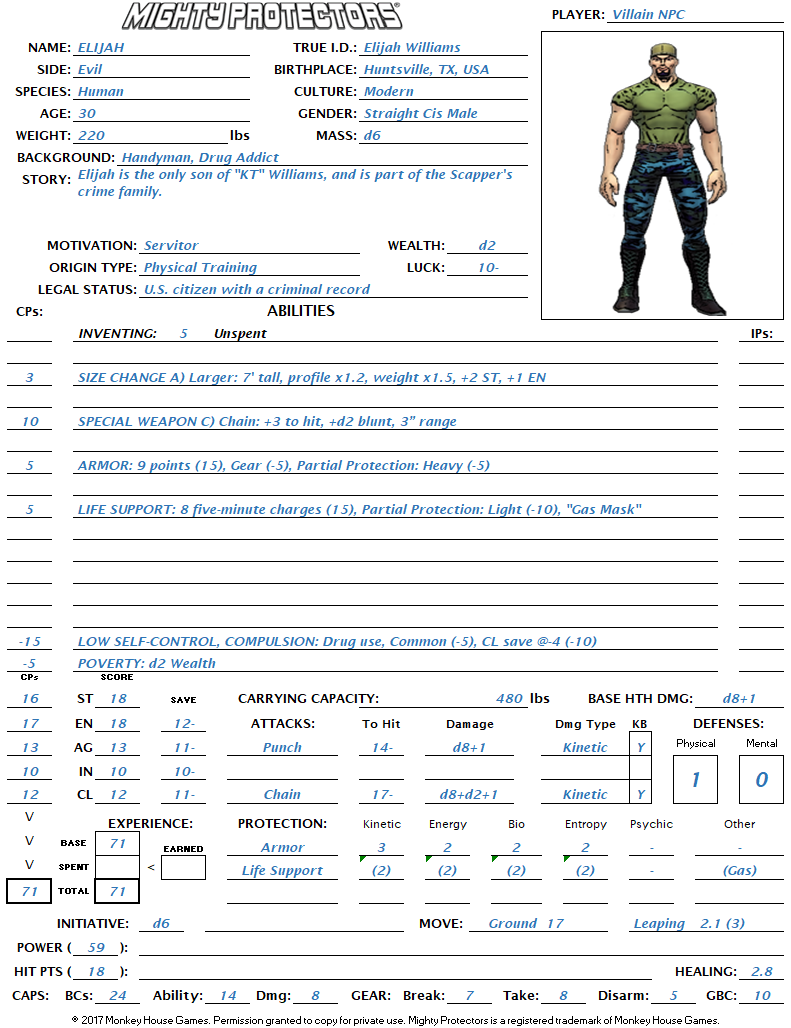 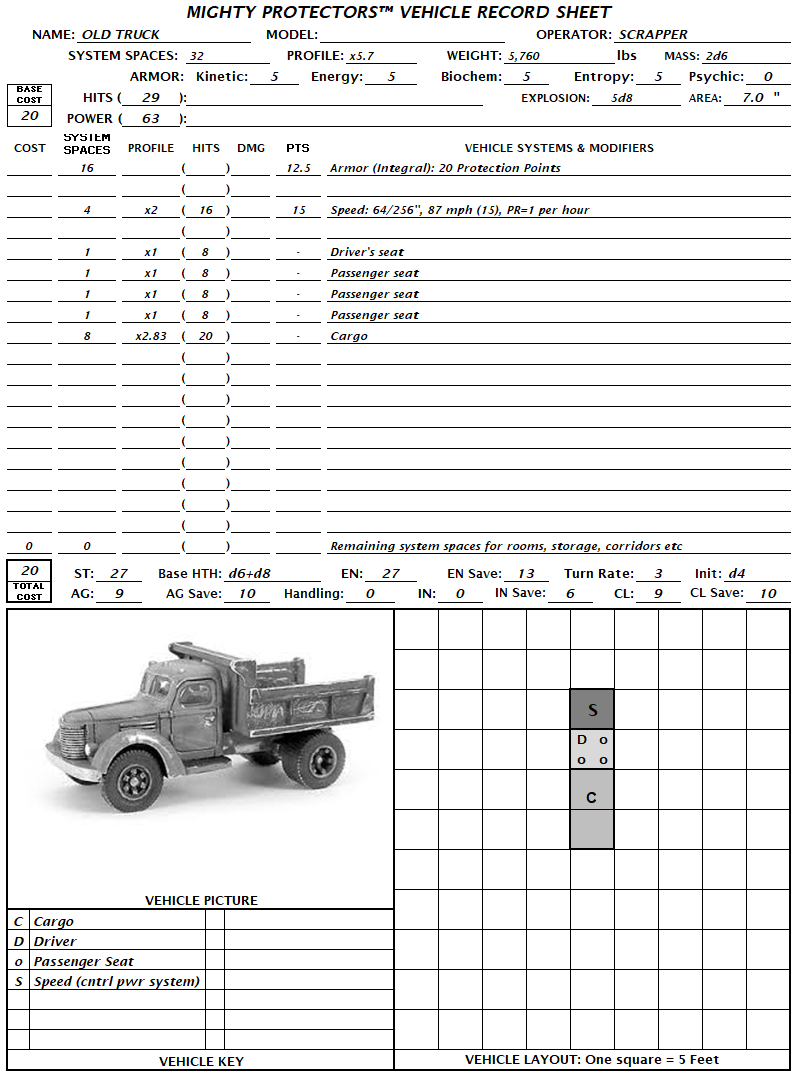 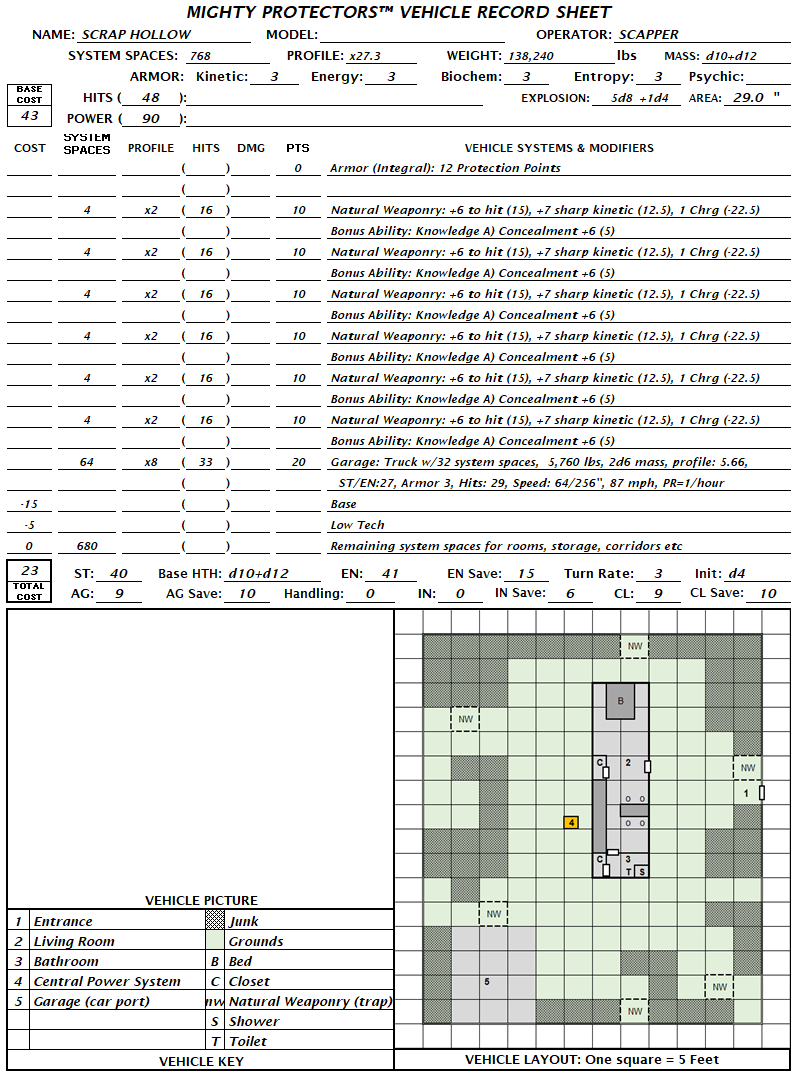 Notes:
1. Elijah sleeps on a couch, which isn't shown on the "Scrap Hollow" map.
2. A large propane tank serves as the "central power system" for the Scrap Hollow base.
3. Scrapper's armored vest is 3/3/3/3 protection (default values).

In my Silver Surfer post I mentioned having done the math to figure out penalties at light year ranges. Well, here's the chart I made. Enjoy!

Here is my Mighty Protectors write-up for the Silver Age version of the Silver Surfer and his Cosmic Surfboard!

This is all very esoteric stuff, but when the Surfer was tracking planets for Galactus, he might do so at a 14 Lightyear distance, which in the Mighty Protectors rules has a range penalty of -54 (I worked out the math).

An Earth-sized planet would reduce the ranged penalty to -40. With his telescopic bonus of +12 and with his Acute bonus of +24, the Surfer has a final penalty of -4. His surfboard can travel at 14.26 LY per hour. So, in order to find a planet with an appropriate life-giving energy he needed to make an IN-based task check of 7 or less! 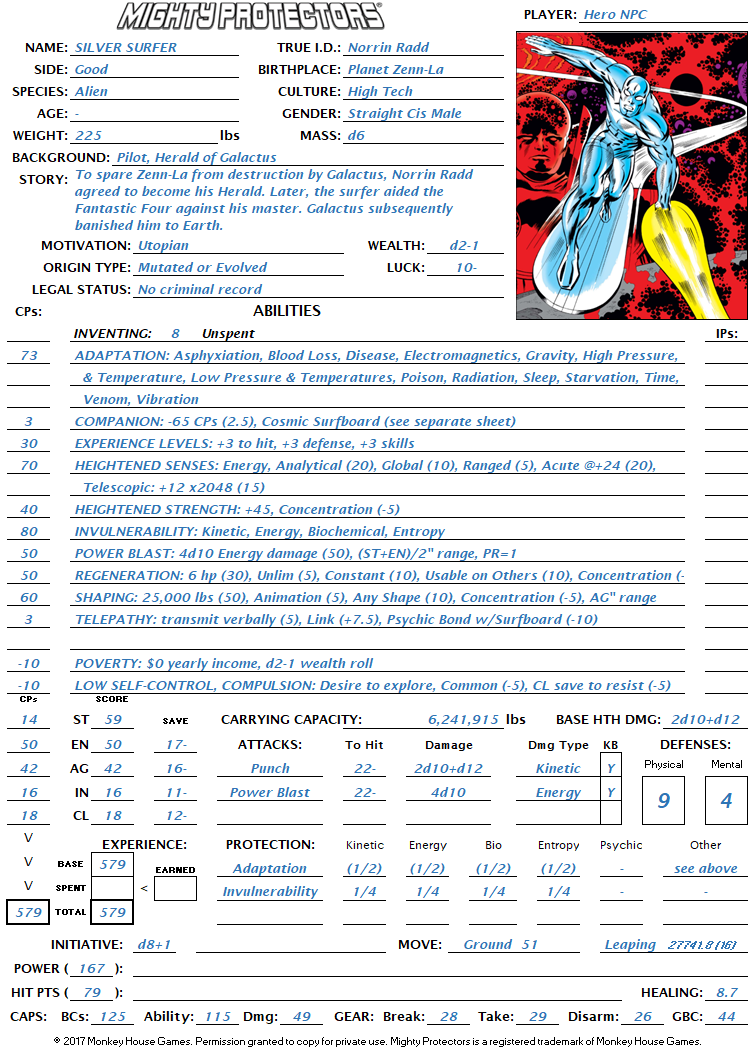 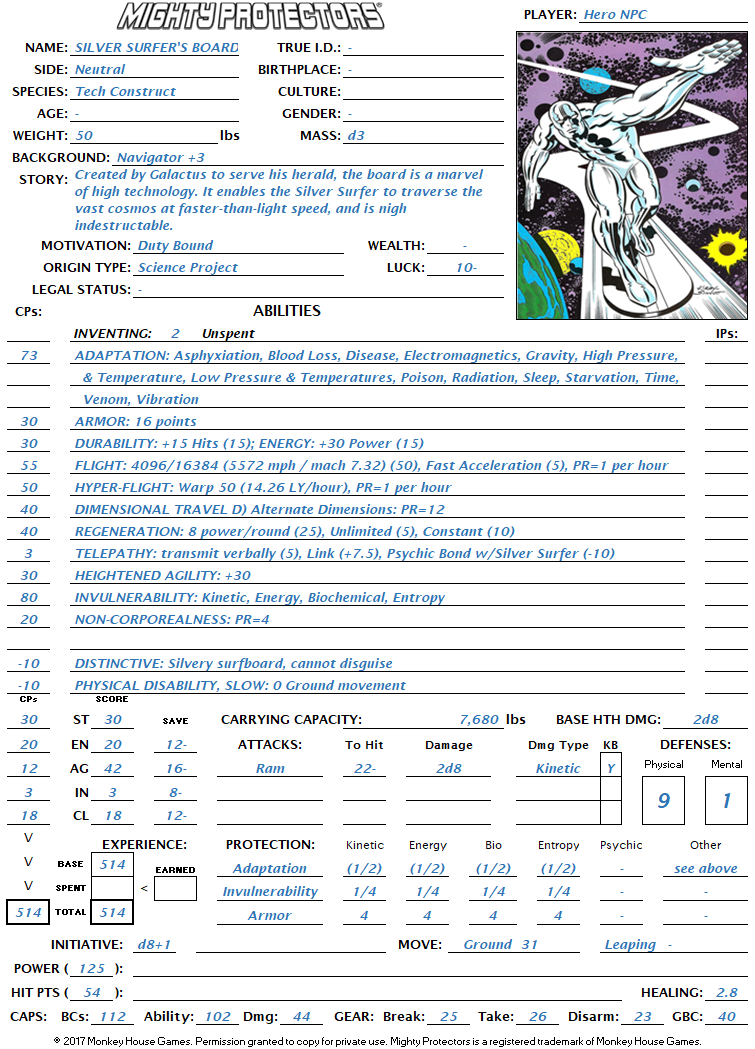 The Surfer after Doom is Defeated 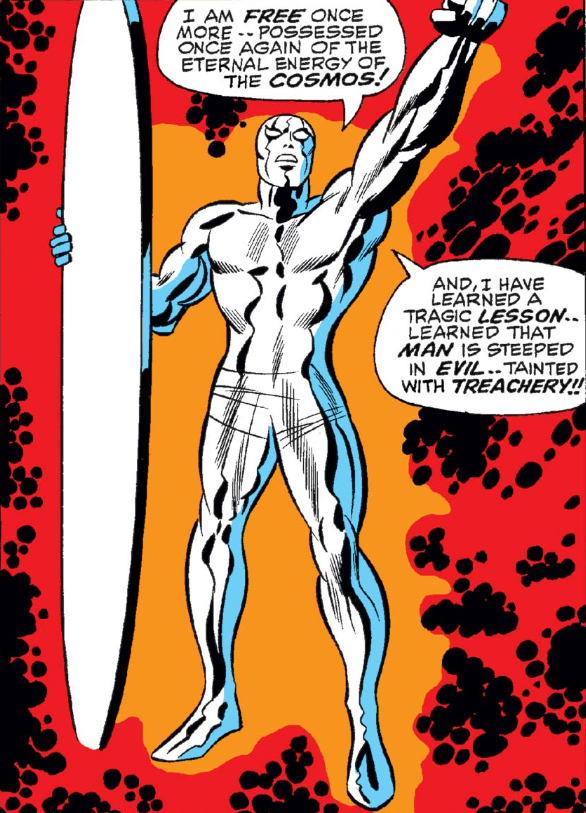 Notes:
1. I used the Companion ability to model the surfer's surfboard, as it often acted much more like a companion than a simple piece of gear.
2. In the comics, the surfer is able to affect huge areas, such as raising mountains or disturbing miles of ocean, something that is not possible with the current version of Mighty Protectors.
3. I took a modifier from Transmutation -- "any physical object" -- as a cost model for the Surfer's Shaping ability, as he can create almost any type of material.
4. The abilities which require concentration to activate is the surfer directing his vast cosmic power into an ability.
5. I did not give the surfer the cosmic awareness ability, as the MP version doesn't really fit him. His heightened sense of energy detection not only worked to find planets for Galactus, but it also works as a form of "cosmic awareness" as he can sense cosmically powerful beings or events.


The Silver Surfer is a trademark owned by the Disney Company. This write-up is by B.K. Adams. Mighty Protectors is a trademark of Monkey House Games.
Posted by bk adams at 8:16 AM No comments:

SPOILER WARNING!
This write-up details the super-abilities and other information about the character from the new Amazon Prime show The Boys.Here's my Mighty Protectors write-up for Black Noir, one of the supers in the group called "The Seven."Black Noir is a clone of Homelander, only stronger and less stable. In the comics, he actually kills Homelander before he himself is eventually killed. 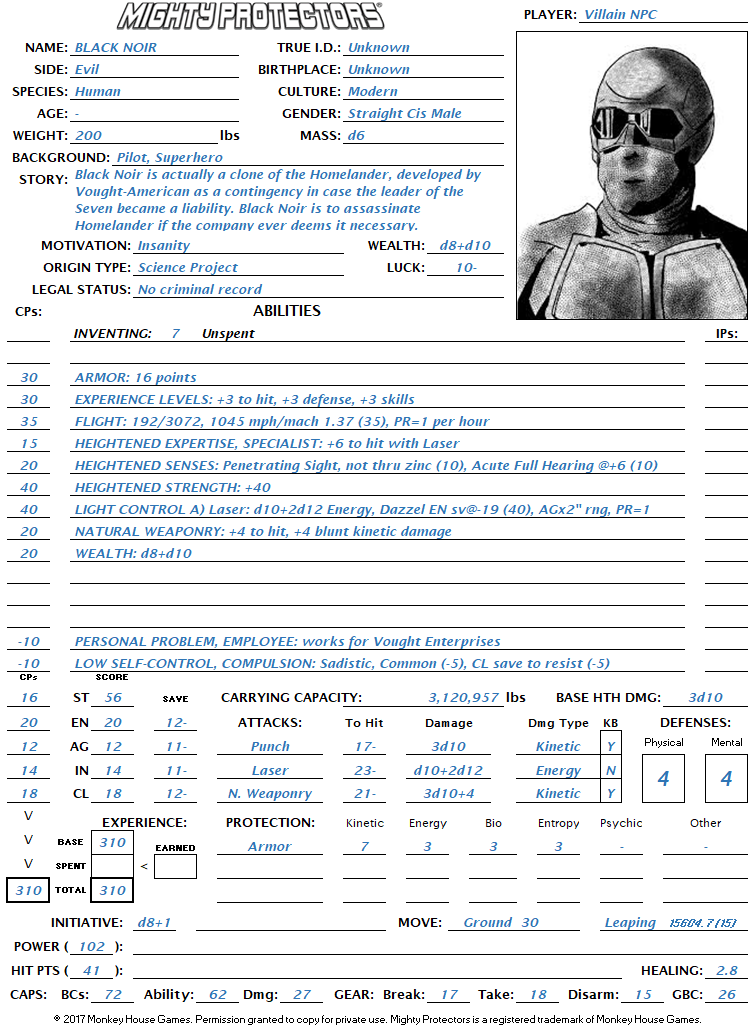 Notes:
1. I made him stronger than the first version of Homelander that I created.
2. I also added Natural Weaponry to give him a distinct edge in HTH combat over Homelander.
3. It's been suggested that Homelander, and consequently Black Noir, should have Invulnerability. I think that's a reasonable suggestion but it makes them MUCH more difficult to defeat.

Black Noir is a character on the Amazon show, "The Boys". This write-up is by B.K. Adams. Mighty Protectors is a trademark of Monkey House Games.
Posted by bk adams at 11:12 AM No comments: 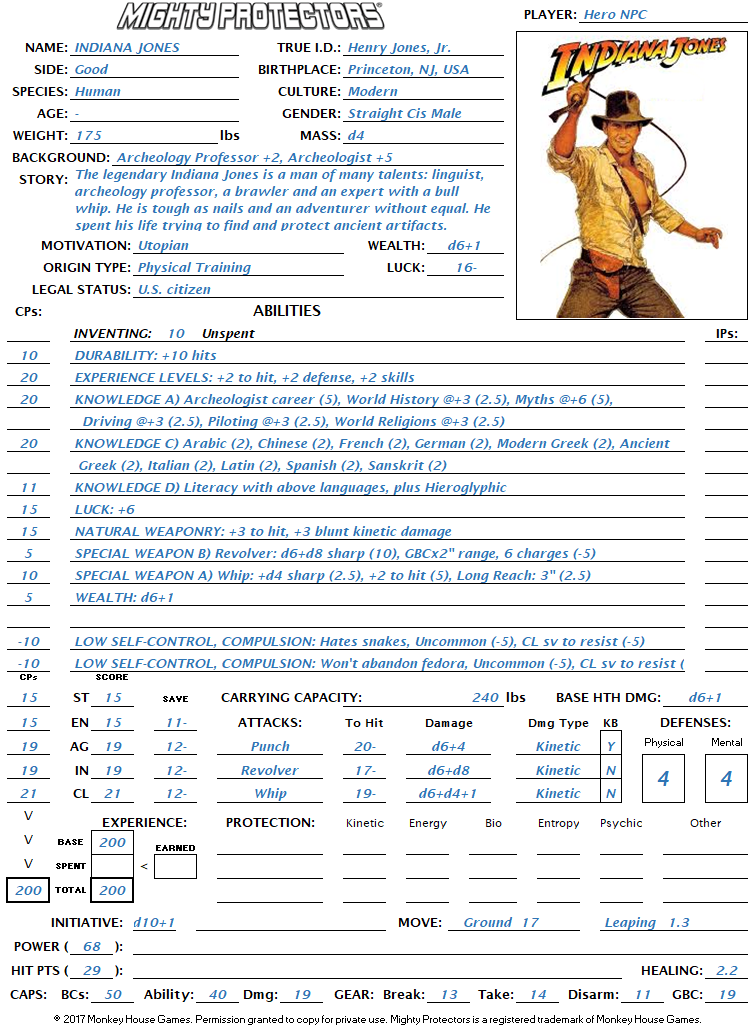 Indiana Jones is owned by Disney. This write-up is by B.K. Adams. Mighty Protectors is a trademark of Monkey House Games.
Posted by bk adams at 9:48 AM No comments:

Here's my MP write-up for The Female, a member of the Boys. 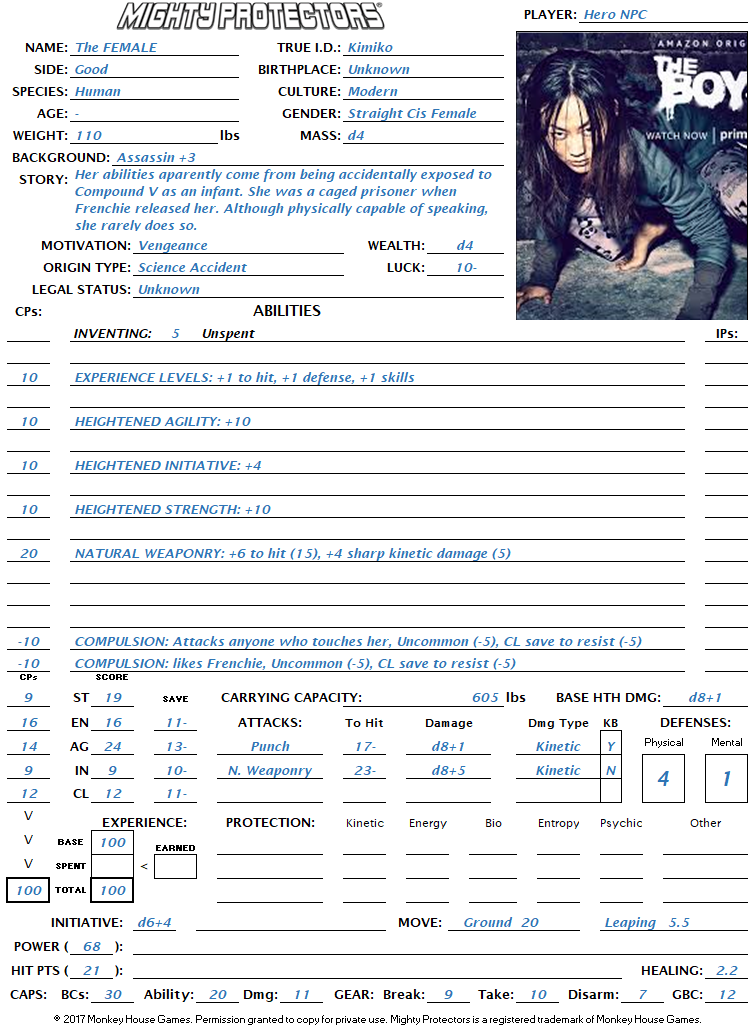 Notes:
1. I put the Female on the Good side, even though she murders people, like almost every protagonist on the show.
2. On the show, her strength is debatable, but she's strong enough to snap a grown man's neck and she also leaps ten plus feet from a crouched position. So, I gave her close to peak human strength.

"The Female" is a character on the Amazon show, "The Boys". This write-up is by B.K. Adams. Mighty Protectors is a trademark of Monkey House Games.

Here's my MP write-up for Mother's Milk, a member of the Boys. Here's a link to a google sheet showing his weapon Arsenal. 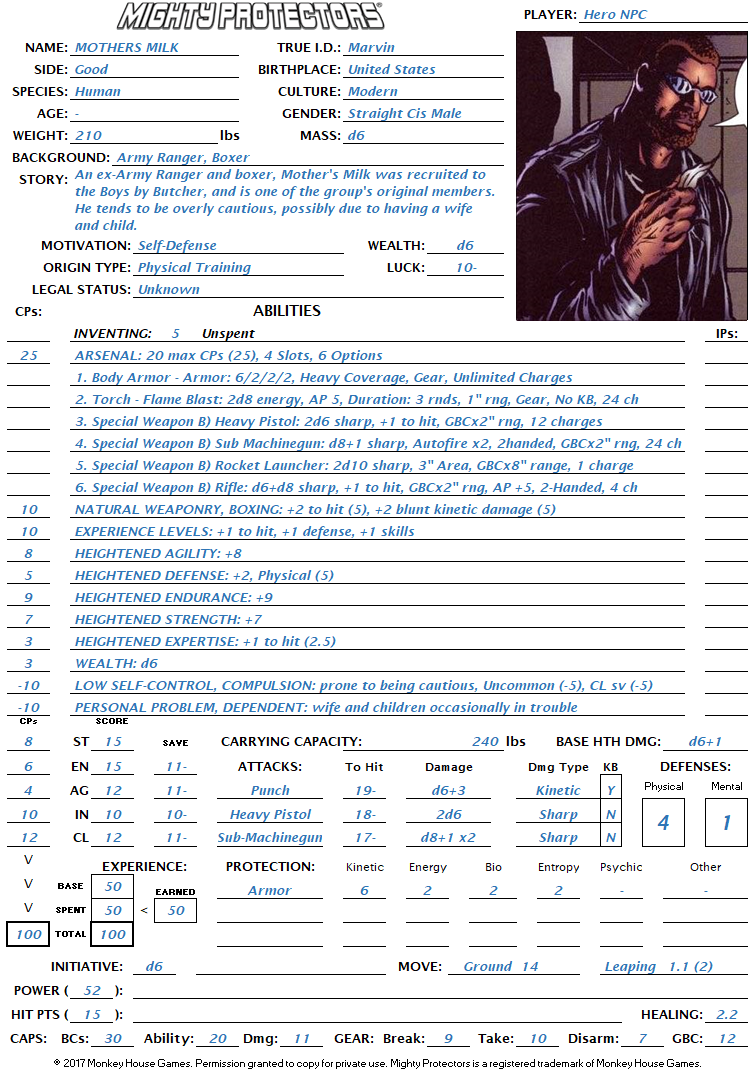 Notes:
1. His Arsenal is 5 CPs over the Ability Cap.

Mother's Milk is a character on the Amazon show, "The Boys". This write-up is by B.K. Adams. Mighty Protectors is a trademark of Monkey House Games.