Here's my MP write-up of Spaceboy, a.k.a. Number 1, a.k.a. Luther, of the Umbrella Academy. This write-up is based upon the comic book by Gerard Way and Gabriel Ba, and not the live-action Netflix series. 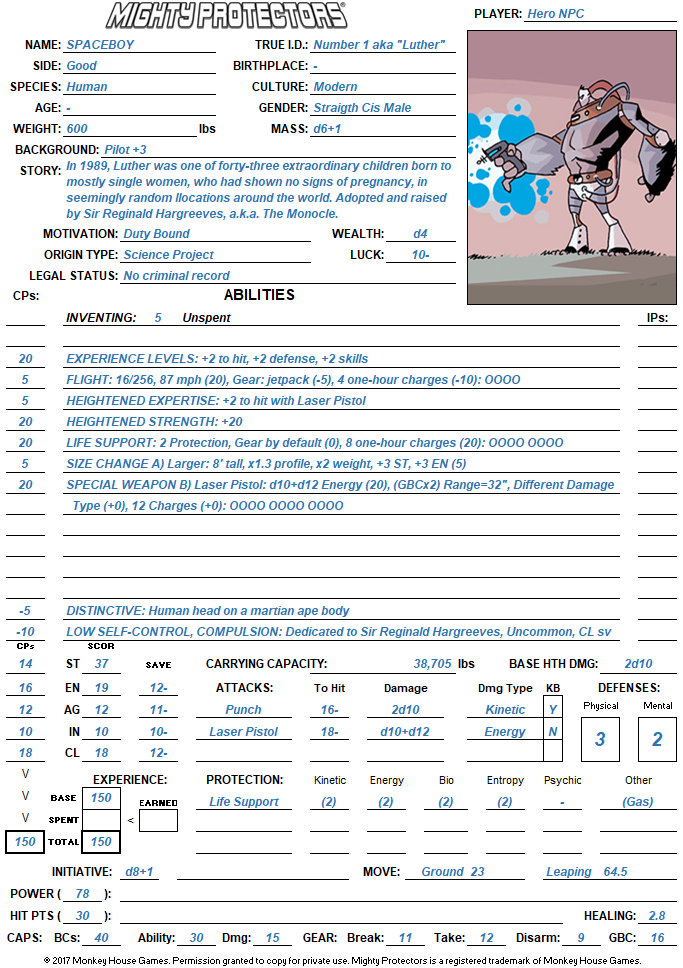 Notes:
1. It's not clear to me exactly how strong Luther is, but he's shown in the comics as being able to smash through a rock wall as a ten-year old boy. He is clearly the strongest member of the group.
2. Sir Reginald once describes Number 1 as being an expert with firearms which is why I gave him the expertise with his laser pistol (one could argue that this should be higher and/or apply to all guns).
3. In the comics, he is always wearing a space suit. It was never shown, at least in the issues that I read, exactly how long he can survive in space, thus I gave him the standard amount of CPs in the ability.

The character Spaceboy, and the artwork shown here, is a trademark of Dark Horse comics.
Posted by bk adams at 9:00 AM No comments:

Here's my MP write-up of Doc Savage. His arsenal of gadgets and weapons is shown here. 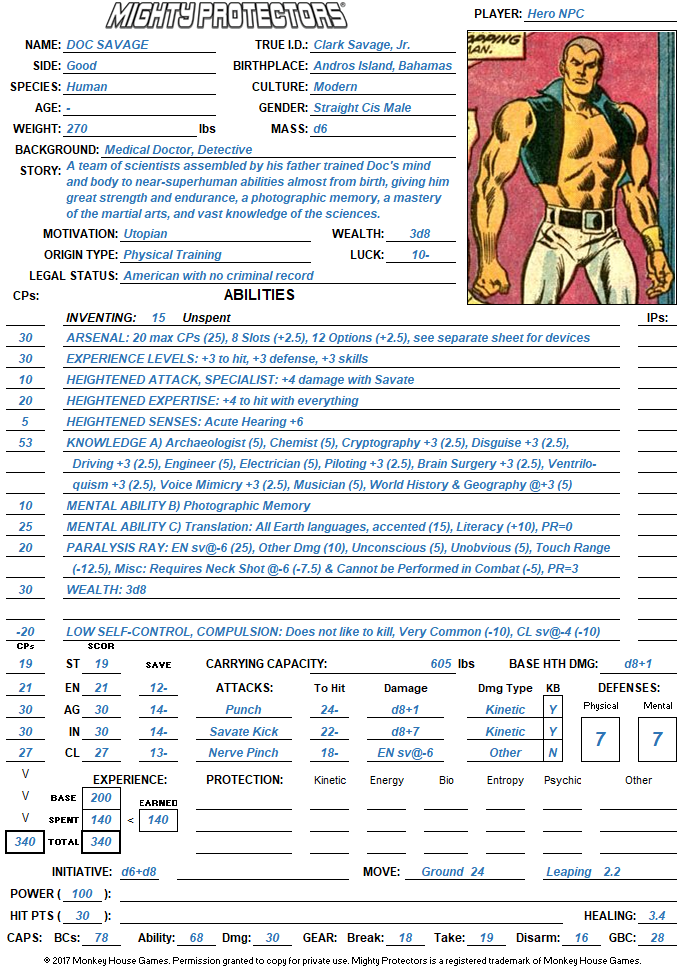 Notes:
1. Paralysis Ray models his "nerve pinch" ability, which must be used against the target's neck, and cannot be done while in combat.
2. I did not give him a base or vehicles, but he has both in the stories. His vehicles have included: auto-gyro, roadster, submarine, and long-distance airplane.
3. I also did not give him Companion to simulate his team mates, most of which are probably in the 75-100 CP range.
Posted by bk adams at 10:39 AM 3 comments:

Mystery of the Manchu Dragon! 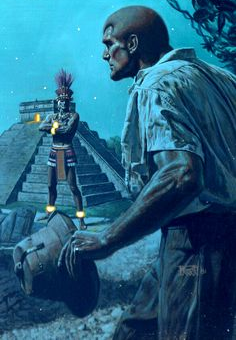 The adventurers return to the Kersey house, where they regroup and tend to their wounds. They also revive young Jack Kersey with steaming cups of strong black coffee. Once awake, the lad tells the adventurers that their father had put tattoos on both he and his sister's back. Jack has the "left" side while Lilly, his sister, has the right half. The tattoos are written in ancient Manchurian -- words that Sophia Mayer eventually translates.

The adventurers next deal with the big Russian they captured, Georgy Miroslav -- who happily explains to them that he's a simple business man... and is willing to trade valuable information in exchange for his freedom. After some hemming and hawing, the PCs agree to his terms.

Miroslav tells the heroes that men who work for the nefarious and enigmatic Golden Emperor have kidnapped Lilly Kersey, and that she is held captive on a "tramp steamer" named the Eastern Prince. 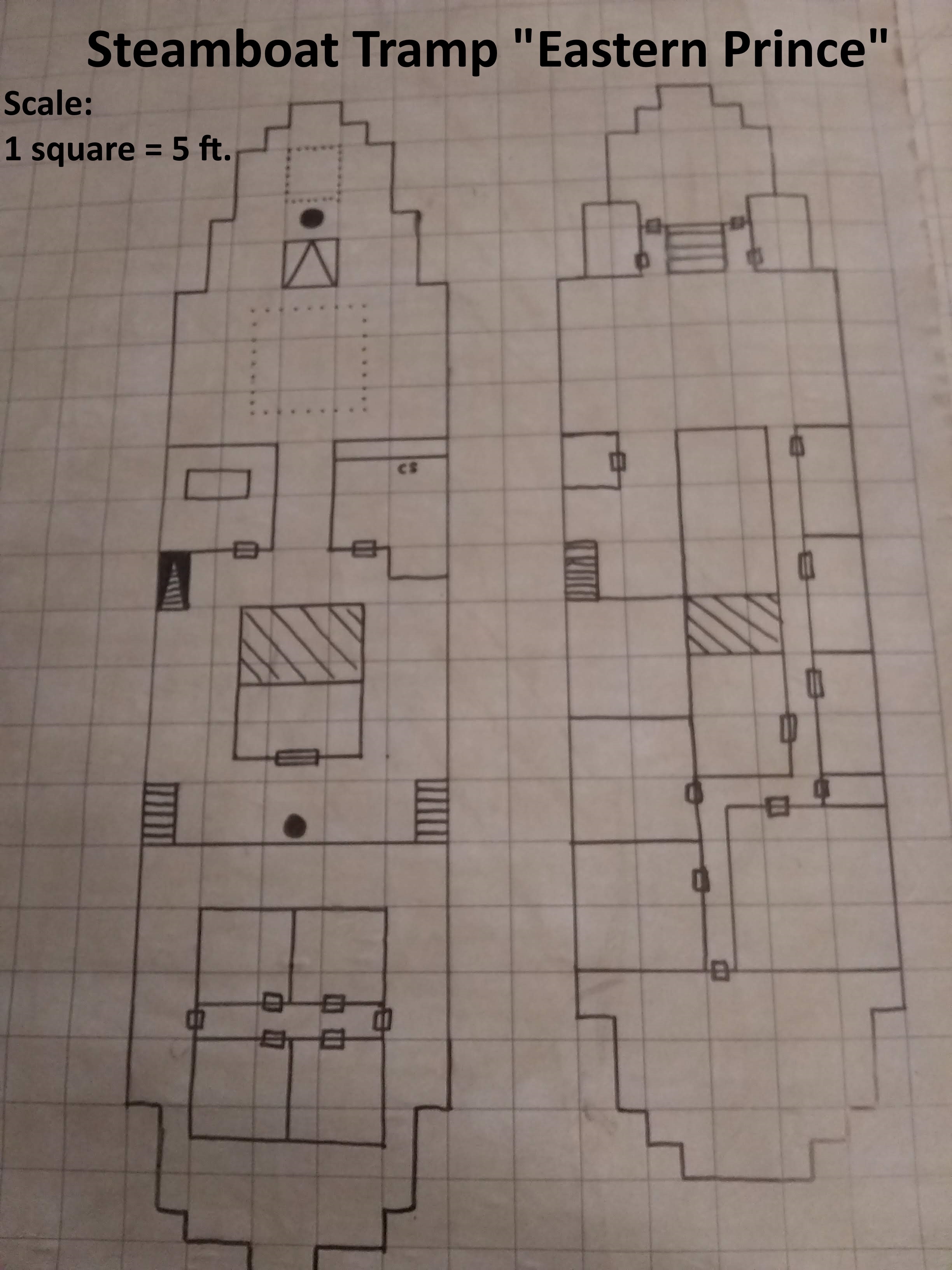 The heroes run to the docks in search of the Eastern Prince. In the Harbor Master's office, they learn that it has already sailed. Lao Shi, a Chinese captain who just happens to also be at the office, overhears the conversation and offers to transport the heroes out of Shanghai... for the right price. 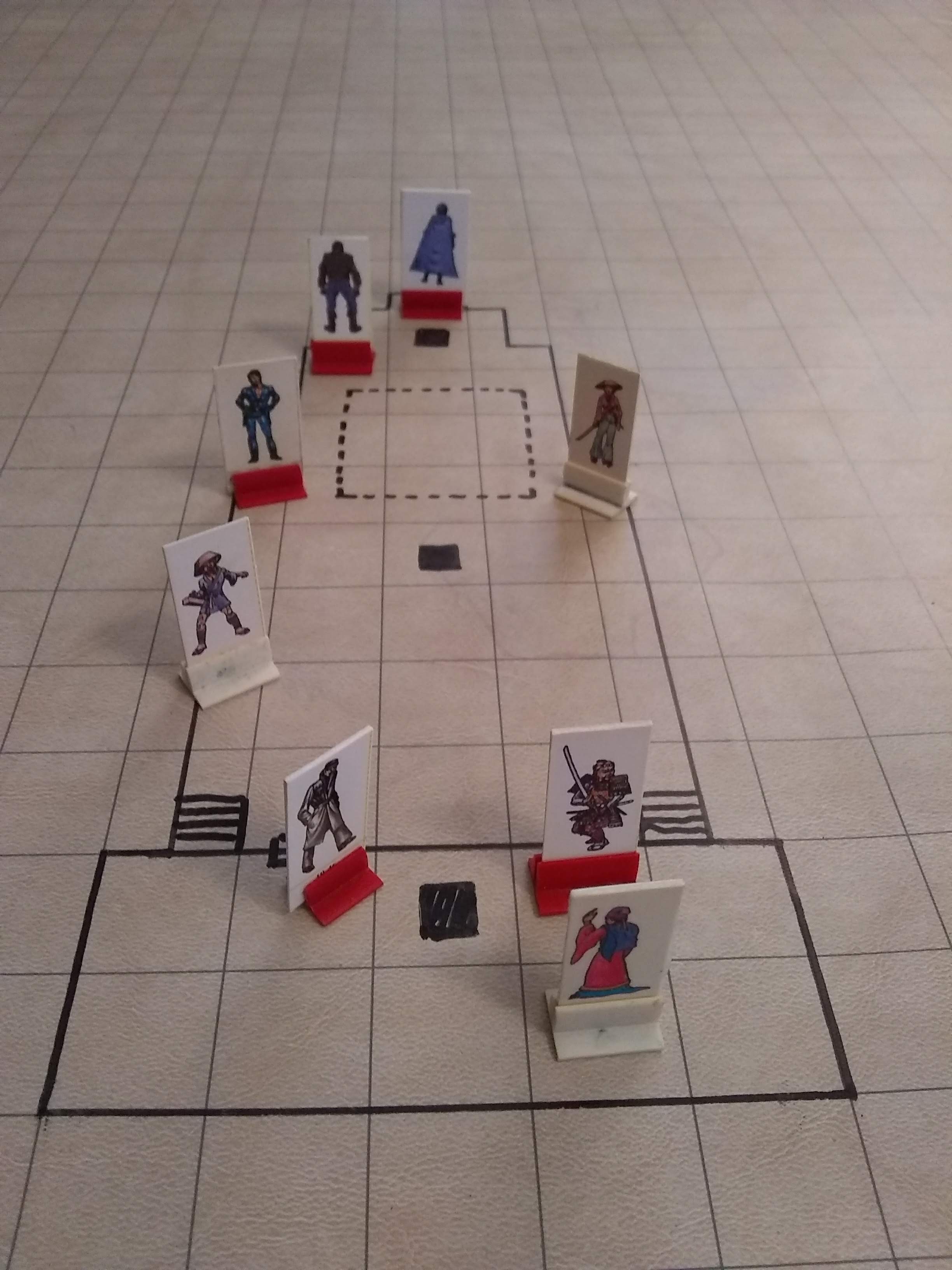 The heroes agree to pay Captain Shi his price and board his Junk, the Samarang. Following the directions of the treasure map leads them to a mysterious fog-enshrouded island. They see the Eastern Prince anchored in one of the island's bays, but decide to steer clear of it. After weighing anchor on the western side of the island, they take the life boat and row to shore. Once on the island they make their way inland, following the directions of their map.

They hear gunshots and men shouting. Sneaking up through the dense jungle foliage, they see a relatively open area, with a mountain stream running down the middle, numerous felled trees, and huge rocks, and a fight between the Golden Emperor's men and a giant lizard-like monster! They also see Lilly Kersey, her wrists bound with rope -- they immediately decide to free her. With cover fire from Killian, Red Razor runs to the girl and downs one of her captives, while Killian takes care of the second oriental. The heroes are then faced with the giant monster. With a mighty swing of his sword, the samurai strikes the monster's head, killing it in one blow.

Lost City of the Manchu Dragon

The heroes proceed onward following the stream and eventually making their way to a waterfall -- behind which is a tunnel. Down the long corridor they march, until finally they get to ancient, worn steps and the entrance to the lost city. The city is seemingly carved out of stone by cyclopean hands in ages long past and forgotten. The Golden Emperor's men are fighting natives in small groups here and there. 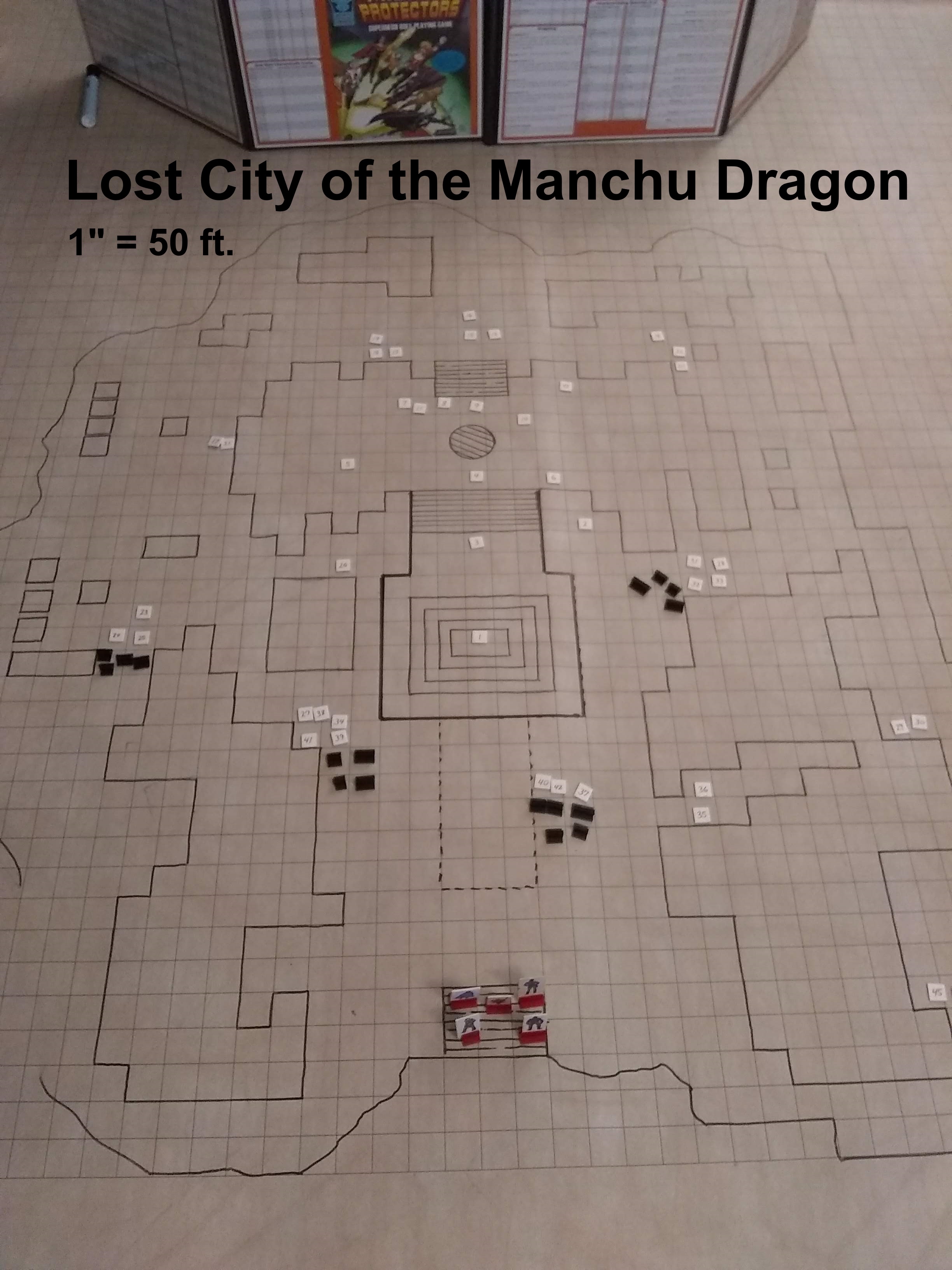 Dragon Crown of the High-Priest

The heroes decide to be sneaky and make their way step by step to the top of the ziggurat which dominates the city. They successfully avoid the Golden Emperor's men as well as the natives and  eventually arrive at the top of the ancient pyramid. Once there, they see a native who appears to be some sort of high priest, lavishly dressed in skins and furs, sporting a feather headdress on top of a golden dragon crown -- he wields a glowing skull-tipped staff. As the priest drains the life-force from one of the last Asiatic invaders, the heroes attack!

After a fairly short battle, the heroes emerge victorious. Although the Hood did have some of his life force drained. With the artifact in tow, the heroes leave the cavern and return to Lao Shi's junk.

The heroes decide to sail for Hong Kong. Once there, they plan on telegraphing Mr. Tunsley, informing him of their successful adventure.